Nanska Osa Agame (ナンスカ・オサ・アガメ, Nanska Osa Agame), known only as the Shaman outside Japan, is a character from Mega Man Star Force 2 that lives in Whazzap (Nanska). He can EM Wave Change with Condor to become Terra Condor.

The Shaman of Whazzap was upset that his country was poor and behind all the other countries because they held on to their old ways. He hoped to use Bud, who has amnesia and is called Budicus, to make his land prosperous by saying he is a herald of Mu, turning him into a figure head. However, Geo, Luna, and Zack rescue Bud. Afterwards, the Shaman is left dejected until Hyde appears and gives him one UMA, Condor. They EM Wave Change and become Terra Condor. He kidnaps Geo's friends and plans to sacrifice their laughter to Mu by tickling them forever, but he is defeated. Geo and his friends forgive the Shaman and Bud gives him the idea to tell others that Whazzap's spare ribs are a local speciality, which he found delicious. Tourists start visiting and the Shaman uses them as a way to make his country prosperous.

The Shaman appeared in a Battle Memory from Rockman Xover.

His role is similar to the game. He is the leader of Whazzap, and has a large bird on his head that is used to select a person every year in a festival. While in the temple, Condor appears and takes control of him, wreaking destruction on his village as Terra Condor to control it as a god. Looking at a flower garden offered in a previous festival snaps him back to reality, making Condor lose control for enough time to Mega Man defeat him and make the Shaman return to normal. 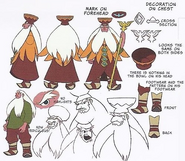 Concept art of the Shaman.

The Shaman in the anime.

The Shaman and his bird in the anime.

The Shaman under Condor's control in the anime.
Add a photo to this gallery
Retrieved from "https://megaman.fandom.com/wiki/Shaman?oldid=292301"
Community content is available under CC-BY-SA unless otherwise noted.