SharkMan.EXE (シャークマン, Shākuman) is the NetNavi of Maysa in the MegaMan NT Warrior anime series. Much like his operator, SharkMan had a prominent role in the first season before the two of them were removed from the cast at the start of Axess, although the duo did return in one episode of Axess.

In the anime, when SharkMan speaks, strangely, his mouth sometimes doesn't move when doing so. He regularly shifts between talking normally and speaking with his jaws clamped shut, or his mouth being partly open but not moving throughout the anime, which varies from episode to episode. It's unknown why this occurs.

SharkMan first appears in episode 5 when the WWW opens the locks at the DenTech City aquarium, allowing all of the robot fish to escape. SharkMan initially appears antagonistic by harassing MegaMan and knocking him into the water. Both MegaMan and Glide try to stop the viruses, but they are overwhelmed by a giant Jelly virus. However, SharkMan helps them defeat it by weakening it as MegaMan uses an ElecSword received from Commander Beef/Maysa. He reveals his true intentions of attempting to stop the viruses, but admits he was overwhelmed. SharkMan then jacks out. Apparently, he is known as a legend in the Cyberworld.

In the beginning of the N1 Grand Prix, Maysa (under his alter ego of Commander Beef) enters SharkMan into the competition. He stalls his match against WhaleMan to allow Lan to master the Program Advance. Later, he and MegaMan go into a tag team NetBattle against StoneMan and BlasterMan near the final stages of the tournament. During the battle, SharkMan loses so that MegaMan can advance to the next round.

SharkMan later appears with Commander Beef in his various heroic endeavors, working together with fellow Net Agents Sal (disguised as Black Rose), WoodMan, Miyu (disguised as Mysteriyu), and SkullMan. One scenario involves him and his fellow teammates being turned to stone (and later being restored back to normal) during their battle against PharaohMan while another results in his absorption by the Grave Virus Beast and being subsequently restored once the Grave Virus Beast is destroyed. 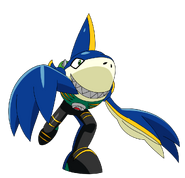