Mega Man Legends
Mega Man Legends 2
Mega Man Legends 3
The Misadventures of Tron Bonne
Rockman DASH: 5tsu no Shima no Daibouken!
Project × Zone
The Sharukurusu (シャルクルス, Sharukurusu) is an agile humanoid Reaverbot from the Mega Man Legends series that has each of its arms and legs attached at the same joint place. Sharukurusus usually simply walk around in an area, with its footsteps echoing in the ruins they appear, but when it spots a target, this warrior will quickly close the gap between itself and the target, attacking by charging with its piercing rotating claws. Its charge is strong enough to knock down the target onto his head.

The smaller Sharukurusus are green-colored and about the same height as MegaMan Volnutt (maybe a few inches taller). In the Lake Jyun Sub-Gate ruins, there are blue Sharukurusus with the ability to become transparent and sneak up on an intruder. In the Sub-Cities, they appear in a larger, red-colored form. Gai-nee Tooren drops Sharikurusus.

Sharukurusu were planned to appear in Mega Man Legends 3, where they would have attacked Klickelan Island alongside other Reaverbots.

Large red Sharukurusus and golden Furiferis come out endlessly of the Colossus in the last mission. The Servbots can hold them for a short period. 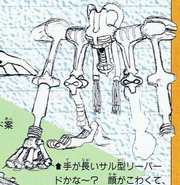