Mega Man 11
Shimobey (シモベー, Shimobey) is a miniature explosive enemy from Mega Man 11. It attacks by running after Mega Man and doing jumping kick attacks similar to the ones Torch Man uses. When attacked it flies backwards and explodes once it makes contact with something. Shimobeys have a humanoid design. Their skin is dark grey.

Additionally, Shimobey can be used to destroy the explosive boxes without having to use Blazing Torch or Chain Blast, as well as attacking Thrill Twins 1 & 2 during their sub-boss battle.

An actor robot used in hero shows as the evil foot soldier. Dreaming of someday playing the hero, it always tries to look its best as the heroes beat it up. 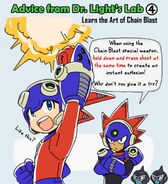 A Shimobey, seen with other enemies on Rockman VR: A Targeted Virtual World!!
Community content is available under CC-BY-SA unless otherwise noted.
Advertisement