"I had no idea I'd be able to make a weapon this powerful... It almost frightens me... This is an arm-mounted laser! The beam is so highly focused that it will shoot right through a single enemy and keep on going--you can use it to destroy multiple enemies in one shot!"
—Roll Caskett

The Shining Laser shoots a straight beam at a rate of least 10 shots per second (the fastest firing rate of any weapon in the first game) and can have infinite ammunition when fully upgraded. This weapon is so powerful it can destroy any form of MegaMan Juno (the final boss in the game) from full health in less than 7 seconds.

Shinging Laser has unlimited ammunition when fully upgraded, but had a change in design. It now is a literal laser, shooting a long stream that does continuous damage.

Roll can develop this weapon with the items Laser Manual and Green Eye.

The Shining Laser is Mega Man Volnutt's strongest attack in the crossovers Namco × Capcom and Tatsunoko vs. Capcom. 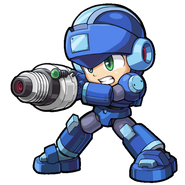 Retrieved from "https://megaman.fandom.com/wiki/Shining_Laser?oldid=346614"
Community content is available under CC-BY-SA unless otherwise noted.