Mega Man X can learn the Shoryuken by entering the game's secret capsule. In Mega Man X2 it is executed with →↓↘+ATTACK while X is at full health and on the ground. In the two Xtreme games it is executed by charging the X-Buster and holding ↑ before releasing the attack. X will surround his arm with fire and perform a powerful jumping uppercut in a spiraling recovery motion, causing massive damage to its targets. In X2, unlike the other Light Capsules, Light does not actually describe what the upgrade is, instead showering praise to X for managing to find his capsule before beckoning him to step inside for a special surprise.

While it is believed to kill all bosses in one hit, it does not. If the edge of the boss is grazed, it takes heavy damage, but does not kill it entirely. Morph Moth will not be killed by the Shoryuken if hit in his cocoon form, but instead will take as much damage as could be inflicted to make him shift to his second form. Sigma's viral form takes several hits to be killed with the Shoryuken, although it's possible to one-shot Sigma by trapping him on the ceiling.

The Shoryuken is not saved in passwords, but there is a secret password to start with it.

In Mega Man X4, Shoryuken is one of Magma Dragoon's attacks. X can perform a jumping uppercut by using a charged Rising Fire, which can be obtained after defeating Magma Dragoon. Ryuenjin, Zero's skill counterpart to Rising Fire, is also an upward attack, a rising slash.

In Mega Man X5, Shoryuken is one of Spiral Pegasus' attacks. X can perform this skill to send Wing Spiral, which can obtained after defeating Spiral Pegasus.

The Shoryuken is one of the techniques X can perform while donning the Ultimate Armor.

Avalanche Yeti performs Hyouryuushou in a manner of Shoryuken style. After defeating him, Zero and Layer are capable of using Shoryuken as a variation of Hyouryuushou when equipped with the K Knuckle. While using Shoryuken, Zero (or Layer) performs an upward-spiraling, ice-element uppercut that freezes airborne enemies on contact. 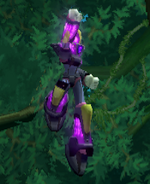 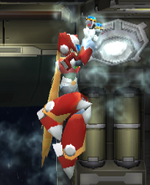 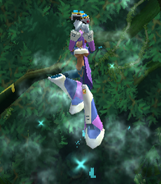 Shoryuken is used by Ryu.

The move is also used in the Archie Comics crossover Worlds Unite. In Marvel vs. Capcom: Infinite, X remarks that he had always wanted to see a real Shoryuken when fighting against Ryu.

Shoryuken in Marvel vs. Capcom 3

Shoryuken (and other uppercut attacks) in Super Smash Bros. for Nintendo 3DS / Wii U 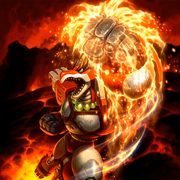