Mega Man 11
Shpider (シュパイダー, Shpider) is an arachnid enemy from Mega Man 11 that appears in Acid Man and Torch Man's stages. They have a yellow body with grey-ish legs sticking out their sides.

Shpiders are normally seen hanging around on the ceiling, but when Mega Man gets close enough to one, it'll dangle down on a thread and try to run into him until he backs away.  Although the Shpider itself is easy to dodge and defeat, it can be troublesome to deal with because it spawns three Mini-Shpiders whenever it's hit with an attack that doesn't kill it. For this reason, it's best to only attack Shpiders with a fully charged shot or with Scramble Thunder (which is Shpider's weakness) so that they can be killed without spawning any Mini-Shpiders.

Mega Man 11
Mini-Shpider (コシュパイダー, Mini-Shpider) is a smaller version of Shpider that can appear as a standalone enemy as well as being spawned from a normal Shpider when damaged.

Due to their smaller size, the Mini-Shpiders are harder to hit. However, certain Special Weapons that work well against low-lying enemies are effective against them, making weapons like Scramble Thunder, Pile Driver, or Tundra Storm good choices.

It is also possible to destroy Mini-Sphiders by luring them into one of the acid pools in Acid Man's stage, though this only works if the pool in question has been turned green by Pipettos or is already green.

Shpider
This arachnid robot lurks on ceilings, waiting to drop down on unsuspecting intruders. Whenever it gets hit by an attack, it releases a bundle of Mini Shpiders.

Mini-Shpider
The miniature arachnid robots dropped when a Shpider takes a hit. Their lighter build means they can spring about and bash into enemies. Mini Shpiders don't grow into Shpiders; they are robots, after all. 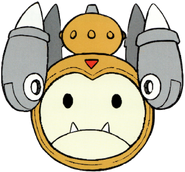 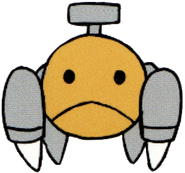 Shpiders and Mini Shpiders in the Mega Man 11 mobile wallpaper
Community content is available under CC-BY-SA unless otherwise noted.
Advertisement