Shuko Kido (城戸舟子, Kido Shuuko) is a character from the Mega Man Battle Network series. Her NetNavi is AquaMan.EXE. She is a shy and constantly nervous character.

Shuko appears as a participant in the City Battle Tournament because she is trying to get enough money for her brothers Atsu and Ty to stay in college. They get her a new washing machine and tell her to throw away the old one, but AquaMan thinks that they're talking about him, so he runs away. Lan Hikari and MegaMan.EXE manage to bring him back in time for their match. Lan defeats Shuko which disappoints her, but her brothers cheer her up.

Shuko appears as a teacher at the Central Town school and as a worker at the aquarium. She is once again working to raise money for her brothers but she broke a valve and caused a flood, and Lan has to collect fish in the Net using AquaMan. Shuko gets fired by the aquarium, but continues her job at the school. MegaMan gains Spout Cross after the aquarium event.

Shuko first appears in episode 16. She is known as the unluckiest girl in the world, due to the fact she hasn't had a single good thing happen to her. Higsby holds a Netbattling Competition as a promotion for his Chip Shop where the prize is ten pounds of rice. She is excited when she sees the poster for the competition because with the ten pounds of rice, she will be able to feed her brothers. She enters the competition.

MegaMan and his friends are surprised when they see Shuko's NetNavi, SpoutMan, (AquaMan was renamed in the anime) because "he's too cute to fight", and it's "just so hard to fight something you just want to hug". The Navi's are also frightened by Shuko's bad luck, so when SpoutMan starts to approach them, they begin to back off, eventually falling off the edge of the playing field. Shuko wins the rice, but remembers that her rice cooker is broken. Higsby offers the rice cooker at his shop, which cheers Shuko up. When she tries to cook the rice, however, the rice cooker in Higsby's shop does not work either. She blames it on her bad luck, which Higsby dismisses, recalling the power in his shop was shut off for maintenance.

Shuko is still very upset, so SpoutMan decides to cheer her up and he leaves to go turn he power back on. After he turns the electricity on, security Navis discover SpoutMan, and they threaten to delete him. He starts to cry, water flowing violently from the spout on his head. The power plant begins to flood, and the workers discover it may cause an explosion. MegaMan and co. go to the power plant's network, where MegaMan stops the flow of water using a retracted Elec Sword. Shuko is cheered up by their success and by SpoutMan's actions, and she decides to works at Higsby's shop from then on. She becomes much happier, and later realizes that Higsby seems to have worse luck than her. 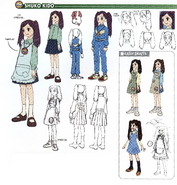 Shuko's Sketch #2.
Add a photo to this gallery

Retrieved from "https://megaman.fandom.com/wiki/Shuko_Kido?oldid=287263"
Community content is available under CC-BY-SA unless otherwise noted.