Shuuichi Eboshi (烏星 修一, Eboshi Shuuichi) is HatMan.EXE's operator and son of the magician Mr. Hat. He is shy and timid, and as his father is very busy, he feels lonely and frustrated.

Shuuichi is a student that was transfered to the same class as Lan in the ACDC Elementary School. While his father was making a show in DenTown, Shuuichi tried to sabotage the show to cancel it and have more time with his father, but Lan and MegaMan.EXE stopped his attempts. After discovering what he was doing, Lan says that he understands him as his father is also always busy, but he works hard for his family, and when Lan can, he always tries to help his father with his NetBattle skills alongside MegaMan, not bother him. Shuiichi then apologizes to his father, who also apologizes to his son for not paying attention to him, and he suggests Shuuichi to join him by making a cyber magic show with HatMan. Shuuichi promises that he will do his best and will never do something bad again, and thanks Lan for what he did, and Lan invites him to play with him and his friends whenever he wants.

Later, Shuuichi reveals to Lan that he wasn't completely responsible for what happened in the tent, he had the help of an unknown person who gave a mysterious data to him, and wonders if it may be related to the incidents Lan is investigating. Lan thanks Shuuichi and takes the data to his father to analyze. Afterwards Lan can return to the tent to challenge Shuuichi in a NetBattle.

Shuuichi appears in episode 21 of the anime. He feels lonely and frustrated like his game counterpart because his father does not have enough time to watch him preform magic. One day, he finds Hatman, actually a Phantom Navi, in his PET. He and the Hatman duplicate "preform" magic all throughout town, making trees erupt from stores and making cars turn into flowers. He is later hypnotized by Hatman when he gets cold feet. He is returned to normal when the charlatan Hatman is deleted by none other than the real Hatman. He explains to his father and Manabe, Enzan, and Netto why and how things happened. His father promised to watch his magic. 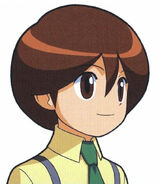 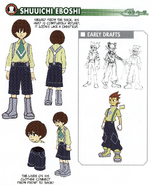