"Are you going to make me repeat myself?"
—Shuuseki to Chaud, Mega Man Battle Network 3

Except for Mega Man Battle Network Official Complete Works, where his Japanese name is kept, Shuuseki's name was not shown in any official English sources.

He is a very cold and strict man, especially when it comes to his son Chaud, whom he expects nothing less than complete perfection from. He expects Chaud to be continually training, and that doing anything else is a waste of time. It is even insinuated he does not let his son eat with him at dinner.

Shuuseki first appears in Mega Man Battle Network 3. His company is the sponsor of the N1 Grand Prix, and also proceeds to observe the beginning part while sitting in the editing room. Before the competition, Chaud talks with his father and hopes that he will watch him, but Shuuseki simply berates him for wasting his time.

Later on, however, Shuuseki is kidnapped and held hostage by Sunayama, who uses him as a bargaining chip when he's unable to beat Chaud in the tournament. He forces Chaud to trade his PET for his father's freedom, but with Lan's intervention he's able to save his father.

Shuuseki finally appears at the end, after Lan and his friends have thwarted WWW. Although he still maintains his icy demeanor, he seems to open up a little more to his son, despite Chaud admitting that Lan did most of the work.

Shuuseki appears in the game.

In the MegaMan NT Warrior anime series, Shuuseki's role is largely the same as his video game counterpart, though Chaud seems to run a majority of IPC's business. He has only a few speaking lines and only appears in flashbacks, making his whereabouts during the anime unknown. 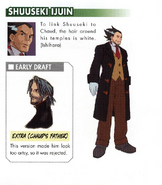 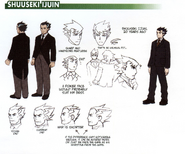