Siarnaq (シャルナク, Sharunaku) is the Biomatch for Biometal Model P and a boss character in Mega Man ZX Advent, one of four Mega Men who participate in the Game of Destiny. He is fought at Legion HQ.

Model P equips Siarnaq with a kunai launcher and cross stars, claws to hang from, and also allows him to vanish into thin air.

Siarnaq appears as a young male with pale skin with dark purple spiky hair. He is characterized by his emotionless, static personality and small irises. Fitting with the motif of his Biometal, he is dressed in a ninja-like garb. The lower half of his face is obscured by a long, tattered red scarf. Like his fellow Mega Men, Siarnaq wears the typical ZX Mega Man vest with a purple coloration. He also has a red triangle visible on his forehead, confirming his status as a Reploid.

His personality is monotone and robotic, making him seem almost lifeless. He is shown to be computer-like, and his speech is capitalized, making him seem more like a Mechaniloid than a Human/Humanoid/Reploid (for example, asking to "INPUT RESPONSE" and declaring "INCOMPREHENSIBLE"). Similarly, in the Japanese version his text is written almost exclusively in katakana, which is typically used to imply a mechanical or monotone voice in that language. Other than that, he seems to have no personality at all, except being at least slightly sadistic, as when the player is defeated by him, he will be heard laughing dementedly. His laugh may show his hidden, or already shown personality, depending on the game's version. If the game is the American version, he will make a robotic and monotonous evil laugh, thus showing his robotic and cold personality. However, in the Japanese version he has a unsettling, deranged-sounding laugh, suggesting he might not be completely stable or even sane. This is supported further by his disk, which speaks of his past being wrought with betrayal.

Prior to the events of Mega Man ZX Advent, Siarnaq was once a Hunter, and assassin for hire. However after being betrayed and left for dead by his friends, Siarnaq became cold and impassive towards others.

Siarnaq first appears after Grey/Ashe defeats Rospark and witnesses a Raider's soul being absorbed into Model W, along with Aeolus. He declares himself "Model P, the Shadow Mega Man" and states that Siarnaq is a codename. Siarnaq encounters the player once more, when the player tries to reach Legion, and fights Grey/Ashe, but is defeated and retreats.

Siarnaq appears in a flashback shown by the cipher, along with all the other Biometal users (excluding Grey/Ashe). He appears once more before the player faces Ouroboros, along with Atlas, Aeolus, and Thetis, trying to stop Grey/Ashe from advancing. However, a timed arrival of Aile/Vent distracts the four long enough for Grey/Ashe to get to the center of Ouroboros. It is then revealed that the four Biometals, including Model P, were stolen prior to Mega Man ZX Advent and were given away. They then "commence battle procedure."

After Ouroboros starts falling apart, Model Z decides to take down the enemy Mega Men by himself, and allows Aile/Vent to go rescue Grey/Ashe, who fainted after the battle. Model Z manages to freeze the four Biometals, which freezes the users (Siarnaq included) themselves. The conclusion of the battle is unknown, since Aile/Vent did not mention anything about Model Z during the ending. However, if the player clears Expert mode, then a secret ending shows the four enemy Mega Men alive and well, in their Megamerged form (it's also implied that the original immortal Reploid Data was inserted into them, as, right after Master Thomas asked Master Mikhail what he think happened to the data, the four showed up). 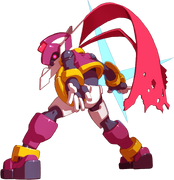 Aeolus and Siarnaq in their Megamerged forms

Siarnaq along with the other Mega Men and Master Thomas.

Siarnaq as seen in Aeolus' cipher.
Add a photo to this gallery

Retrieved from "https://megaman.fandom.com/wiki/Siarnaq?oldid=347818"
Community content is available under CC-BY-SA unless otherwise noted.