< Sigma
View source
watch 02:52
Roblox: DeepWoken - The Loop
Do you like this video?
Play Sound

This article is about Sigma in the Archie Comics series.

The Reploid Sigma was created in the year 21XX and first appeared in the story "The X Factor - Part 2" from Mega Man issue 35, where he was the leader of the Maverick Hunters for two months, having already his fight with Zero, and also has a talk with X regarding the possibility of him joining the Hunters.

In issue 39, Sigma appears again after the Wily Walker goes on a rampage, dispatching Zero and Vile's Hunter companies to challenge the Walker while he goes to Dr. Cain for information. Upon learning where on the Walker its chemical weapons are located, Sigma joins his two subordinates and X (with Sigma having to directly state that X is to attack under Sigma's request after Vile spitefully pointed out that X isn't part of the Maverick Hunters) in confronting the weapons platform, unaware that the addition of his presence prompts the Wily Walker to ready its chemical weapons payload. After the Walker is taken down, he congratulates them on a job well done. However, in an ominous foreshadowing of things to come, he agrees with Vile that Reploids are superior to humans in many ways, which, while he says is why it's up to the Hunters to protect humans, foreshadows his eventual change to a Maverick.

After the Wily Walker incident, Sigma became a Maverick and also the leader of all Mavericks. He then proceeds to lead a revolt on what would later be called the Day of Sigma, with he and his Mavericks proceeding to bomb Arcadia City severely enough to leave it in flames, have his forces kill off various Maverick Hunters who refused to join Sigma, and had threatened to use nukes. X initially considered a peaceful solution until Zero bluntly pointed out while stressed from the events of that day that there is no peaceful solution, at which point X decided to aid Zero and the Maverick Hunters in stopping Sigma. While X succeeds in stopping him and his original body is destroyed, Sigma lives on as a sentient virus and became the greatest threat for the Maverick Hunters and the world.

Sigma is featured as the main villain in the Worlds Unite crossover event linking the story lines of the comics Mega Man, Sonic the Hedgehog, Sonic Universe, and Sonic Boom. Some time between the events of Mega Man X7 and X8, the Maverick Hunters launched a massive assault on Sigma's latest fortress with the intent of wiping him out for good. However, he had also discovered the Genesis Portals and intended to scout out some worlds to take over, with the ultimate goal being to become a god over all of the multiverse. He ultimately settled on Sonic's world, as he decided it was easiest to conquer due to Dr. Eggman's abuse of the Deadly Six making them very easy for them to turn to his side. "Sigma-0" then disappeared through one of the portals just as X came in to end him, although not before cryptically hinting that he had only just begun his conquest of worlds.

After traveling to the Lost Hex in Sonic's universe, Sigma uses Orbot as a host and makes a deal with the Deadly Six, breaking the Cacophonic Conch to free the Zeti from Dr. Eggman and forcing the doctor to create a new body for him, "Sigma-1". After Sigma shows more things for Eggman to create, he complains that working on his body was tiring and it is too much work for only one person. Sigma agrees and captures Dr. Wily to assist him, and both doctors create for Sigma armors that allows him to control the Deadly Six, the Unity Engines, and turn a captured Sonic and Mega Man into Sonic Man and M'egga Man.

His machinery at the ready, Sigma puts his plan into action: sending Sonic Man and M'egga Man to the other's world and use the Unity Engines to fuse them together, allowing him to siphon their power longer. The plan succeeds, but Sigma soon learns of the doctor's plot to have Mega Man and Sonic attack him instead and sends the Deadly Six after them. He ultimately remains confident, having already used the doctor's work to rebuild an army of Mechaniloids to serve him.

As the united heroes attack the Lost Hex, Sigma's powers have already increased significantly from the energy drained from the worlds. Using his new control over space and time, he begins resurrecting an army of his former servants to aid him and even pulls some from his future, such as Burn Rooster. After reviving many of them, Sigma enters in a machine and uses his power to transform into a gigantic Reploid with a Zeti-like body, starting his attack to the Sky Patrol. After the heroes are beaten, "Sigma-2", confident in his victory, leaves Burn Rooster, Vanishing Gungaroo, Double, and Dynamo to finish them while he sends the others to take an Unity Engine to different worlds and gain more power.

Sigma's power begins to increase at an exponential rate as multiple worlds are drained of their power. Though he believed himself to be strong enough to become a god within hours, he was also aware of the efforts of the heroes to stop him and decided to take a preventative measure by destroying the Sky Patrol to leave them without a base. He accomplishes this, but the timely arrival of Metal Sonic allowed those not to sent to other worlds to escaped his wrath.

When the Unified Army arrives and start their attack, Sigma summons several Mechaniloids and copies of himself to assist him. As they fight, Sigma apparently starts losing power, his body crumbling and the copies stopping to work. However, he emerges from his Sigma-2 body as "Sigma-3", stating that the giant body was merely a chrysalis. This new form is vastly powerful, easily defeating every member from the unified army that stands in his path, including being able to knock down the Gore Magala with one punch, block the Celestial Brush, and lift and throw Ryu in his dragon form. When everything appears to be lost, Sonic and Mega Man use the Chaos Emeralds to change into their super forms and face Sigma. Sigma proves powerful enough to fight the two on even terms, but the unexpected meddling of Wily and Eggman with the Master Engine causes Sigma to lose power, weakening him enough for Mega Man and Sonic to defeat him. However, Sigma's ultimate defeat in this adventure came at the hands of Xander Payne, who used the Unity Engine and his own Genesis Portal creating powers to go to the point in time when Sigma attempted to enter Sonic's world. Xander took out Sigma's body at the arctic base, thereby preventing Sigma's plans in the first place and leaving him to recover until the events of Mega Man X8.

Sigma appears in several Short Circuits, beginning in issue 35 where Mega Man X offered to trade him for Mega Man's nemesis of Dr. Wily after his counterpart complained that Dr. Wily was the worst person he ever encountered. Upon seeing Sigma, Mega Man immediately took back his complaints about Dr. Wily. He returned for Issue 39's strip, where he extolled his pet Velguarder as a robot dog superior to Rush and Treble. He and Wily then teamed up issue 40 to rip the last panel of the strip, preventing X from revealing something about the future to Mega Man. He would then appear in the Off Panel for Sonic Universe #76, where Cubot expressed his being thrilled over Sigma's presence in his system until Eggman completed the Sigma-1 body and transferred Sigma into it.

Sigma would then appear in Sonic Universe #77's Off Panel along with a vast array of other Sonic and Mega Man characters who were all shoved into the same massive panel.

Sigma-1 and his army of Mavericks 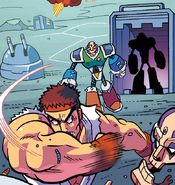