"Listen well, X. There are times when we Maverick Hunters cannot afford to hesitate in pulling the trigger. We must become both sword and shield to those who cannot protect themselves - that is our sworn duty. Never forget that!"
―Commander Sigma before his rebellion, The Day of Σ

"Come and get me, X! The time has come to prove your mettle against me. This fight will decide the fate of all Reploids! The battle may be over, but the war is just beginning!"
—Sigma, beginning his rebellion in the end of The Day of Σ

"It's not over yet, X! The battle! The angst! The destruction! I will make you understand the true potential of Reploids!"
―Sigma as a Maverick, Mega Man Maverick Hunter X

Sigma is the main antagonist of Mega Man Maverick Hunter X. A powerful Reploid who was originally the leader of the Maverick Hunters, Sigma betrayed them and humanity as the instigator of a mass Maverick rebellion.

At first, Sigma was a level-headed and strong-willed leader. He treated his subordinates in the 17th Elite Unit with some respect, but knew how to give criticism when necessary and would never endanger himself for their sakes. He was a dauntless warrior who would not hesitate to take action, even if it jeopardized the safety of his colleagues, but would also try not to intervene in battle, preferring to stay on the sidelines unless required. Despite this tough personality, he was well-respected by his fellow Hunters, and was still humble enough to repeatedly seek advice from his creator, Dr. Cain. While capable of supplying respect to the 17th Elite Unit, it is nonetheless implied that he was incapable of experiencing true empathy, unlike X, which ultimately caused him to consider factoring X into his rebellion plans partly for this reason.

Upon revealing his Maverick nature and beginning his rebellion, Sigma took on a much more misanthropic mindset. He outwardly despised the humans, and believed that Reploids needed to destroy them in order to truly thrive. He retained his leadership skills, but also had no qualms with manipulating others such as X and Vile if it served his interests. While his usual demeanor was as stoic as ever, he would also laugh evilly and wear a crazed grin on his face when his plans were coming to fruition.

Most notably, Sigma harbored an intense fascination with X. He believed that X's complex emotions, such as hesitation and righteous indignation, made him more advanced than any other Reploid, even himself. Sigma was determined to prove this unlimited potential, seeing X as the future of all Reploids, by putting him through a great deal of physical and emotional hardships. His rebellion was tailor-made to mold X into the revolutionary hero Sigma knew he could become.

Sigma, deciding to put Reploid potential to "the ultimate test", hired some hackers to hijack a Mechaniloid and have it attack a building. He then led the Elite 17th Unit to the building, with Zero and Chill Penguin directly participating on the ground, while X was to be delivered and airdropped to the target. He supervised the entire operation with a degree of casualness, merely leaping out of the way of the Mechaniloid's attacks and not directly assisting until the last second. When he did intervene, he quickly slashed through the Mechaniloid's generator along with a Maverick Hunter who was being held in the way, wounding the Hunter but also defeating the Mechaniloid. Afterwards, Sigma criticized X for his hesitation to take the shot and explained that there are moments on the battlefield where one cannot hesitate.

Sigma later met with Dr. Cain in his home to discuss the Maverick situation, and the progress of X as a Maverick Hunter. Sigma was confused when Dr. Cain described X's emotional nature as his greatest strength, but took these words to heart and made experimentation with X a part of his upcoming agenda.

Sigma remained somewhat distant from the investigations into the recent Maverick outbreaks, aware that getting too close to them could expose his involvement. He arrived on the scene in Sector 16 East once X and Zero had checked out the site of Sigma's hijacker squad, whom he killed as a precaution. Zero informed him that the attack was most likely an inside job, and Sigma quietly left before signaling Storm Eagle and Chill Penguin to begin searching for the perpetrator.

The next day, after a significantly increased amount of Maverick activity, Sigma entered the brig where Vile was being held. He slaughtered all the guards and freed Vile, explaining that he needed someone who could easily go Maverick in order to draw out X's potential. He and Vile then departed, relaying that Vile had escaped from his cell and ordering X and Zero to the detention center to investigate. In his final move, Sigma headed to a missile base on the outskirts of Abel City, cutting off his radio in the process.

X and Zero eventually followed Sigma to the missile base, where he showed them information regarding the Maverick attacks. Meanwhile, he planned to attack them from behind, and was surprised when Zero expected his attack and countered it. Taking advantage of the situation, Sigma quickly disarmed Zero and held him in front of himself, ordering X to shoot him in order to save Zero. X attempted to talk Sigma out of his actions and begged him to let him go, causing Sigma to simply laugh. He then wounded Zero with his saber before rushing at X, grabbing him instead and forcing him to shoot him to stop the missile launch aimed at Abel City. X, hopeless and confused, disarmed himself instead, amusing Sigma and allowing him to fire the missiles. X then rushed to stop Sigma again, but Sigma impaled him on his saber, causing him to short out. Sigma was relieved at X's defeat, but the blue Hunter suddenly awoke again, focusing his power into his hand and striking Sigma across the face with it, scarring his eyes. Sigma prepared to fight X, only to watch him deactivate prematurely. Impressed by this development, Sigma laughed aloud again and let him live while departing to announce his rebellion.

Some time later, Sigma stood atop a building to observe the burning ruins of Abel City. He challenged X to come face him, declaring that their battle would determine the fate of all Reploids.

With various Maverick Hunters loyally following him to his rebellion, Sigma continued to wage war against the humans and what was left of the Hunters. His eight lieutenants wreaked havoc throughout the world, both to get rid of the humans and to goad X into fighting and becoming stronger.

Sigma was finally met with X again in the fourth area of the Sigma Palace, where he was pleased to see how far the B-Class Hunter had come in his development. He sent his guard dog Velgaurder after him as an initial test, and congratulated X upon his victory. Sigma then faced him himself, and upon being defeated again voiced his approval of X's power. Following this, his head detached from his body and entered a large battle body that filled the room, challenging X to come at him one last time in order to finally unleash the true potential of Reploids. Sigma was defeated, just as he expected, and was consumed in the fiery explosion that filled the island. While he may have lost the battle, Sigma had successfully proved that X held unlimited potential.

Sigma also appears in the non-canon Vile Mode. It is revealed at the beginning that Sigma had killed Vile's guards before freeing him. Vile is surprised to learn that Sigma had gone Maverick and started a widespread rebellion in the hopes of forcing X to evolve, and that he needed Vile as someone who could go Maverick on his own accord. Unlike in X Mode, Vile moves independently from Sigma due to his assertions of being the true key to Reploid evolution and targets Sigma's generals to enhance his own strength.

Intrigued by Vile's claims after his eight lieutenants are defeated, Sigma invites the rogue to visit his fortress if he is able to reach him with the same methods. Ultimately, Vile is unable to get the chance to do so, since he is defeated by X and Zero during his journey. Sigma then discovers Vile's broken body and questions him in regards to what his motives were. When Vile couldn't give a direct answer, Sigma then leaves him, although not before making sure to radio some of his men with the order to retrieve him.

Sigma retains his original Mega Man X counterpart's attacks, retaining his ability to use his beam saber to block the player's attacks. He will then rush at the player's location followed with a slash or jump across walls to reach the player should they be on a wall. He however gains two new attacks:

The battle against Wolf Sigma has been slightly altered compared to its original Mega Man X counterpart, with the Maverick Hunter X version using new attacks while replacing some of the attacks. Also, Sigma's paws no longer move around randomly across the room. When Sigma attacks by shooting lightning from its paws, the lightning's hit box now covers the entire width of the paw, making it no longer possible to stand on the paw without taking damage from the lightning. Unlike the original Mega Man X, Wolf Sigma is fully affected by the Hadoken.

Once Sigma's health is below half-full, he may use the lightning shock attack immediately after firing the lasers. 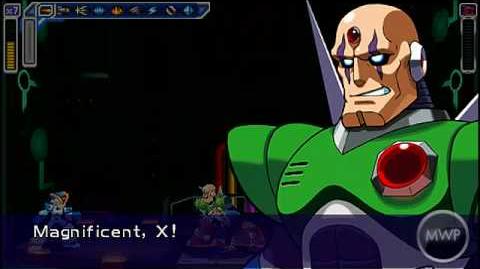 Wolf Sigma concept art.
Add a photo to this gallery

Retrieved from "https://megaman.fandom.com/wiki/Sigma/Maverick_Hunter_X?oldid=356790"
Community content is available under CC-BY-SA unless otherwise noted.