"Repliforce are the fools this time! Now, all that's left is to destroy Earth with the very weapon they made!"
—Sigma

Sigma is the final boss from Mega Man X4. While the Maverick Hunters and the Repliforce were busy fighting each other, Sigma took control of the Final Weapon and planned to use it on Earth, forcing X or Zero and the General to stop fighting in order to stop the Final Weapon before it could be used.

Sigma is revealed as the true mastermind behind the battles and fights against X or Zero himself. Sigma's appearance is hidden by a cloak and he is armed with a beam scythe, resembling a Grim Reaper. This form can only be damaged by X's Rising Fire or Zero's Ryuenjin.

Sigma is constantly appearing and disappearing, and attacks by swinging his large scythe or firing several projectiles that crawl the ground. The projectiles can be avoided by jumping over them. When he appears in the corner of the room, he will use a scythe attack that covers most of the room. It can be avoided by using Wall Kicks on the opposite wall. The best moment to attack Sigma is as soon as he appears.

After taking enough damage, Sigma's cloak is burned out, revealing his new body. Although this is the same body, Sigma recoves his health and changes his attack pattern.

Sigma starts by using Scythe Throw, making his scythe spin around him. Afterwards he uses Laser Attack, throwing the scythe on the player's current position. His following attack depends on where the scythe lands: Boomerang Attack if the scythe hits the floor, and Laser Eye if it hits a wall. He then repeats his pattern. A good strategy against him is to stay close to a wall to avoid his attacks and make the scythe hit the wall. When Sigma prepares to use his Laser Eye, dash jump to the wall behind him and attack him from the wall while he is using the attack.

Three metallic objects resembling Sigma's head, each with an element. The red head releases fireballs, the yellow head electricity, and the blue head has a freezing breath.

Earth Sigma is the body that appears on the bottom left of the room. It is a giant disfigured head of Sigma.

Gunner Sigma is an armed cyborg-like body that appears on the top right of the room. 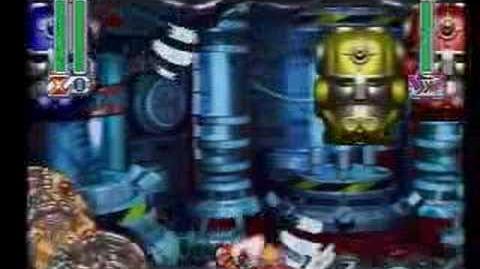 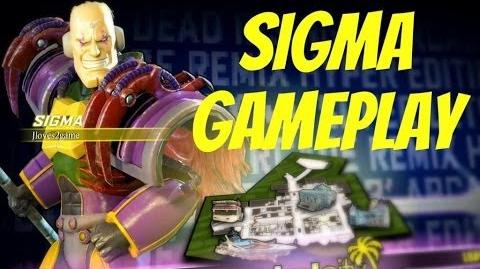 Retrieved from "https://megaman.fandom.com/wiki/Sigma/Mega_Man_X4?oldid=281271"
Community content is available under CC-BY-SA unless otherwise noted.