"We'll work to build a real utopia! It is the world where the human race and Reploids coexist."
―Signas, Mega Man X6

Signas (シグナス, Shigunasu) is a character from the Mega Man X series. He is a Reploid that became the leader of the Maverick Hunters from Mega Man X5 and onward up to Mega Man X8. He cares for both humans and Reploids, and is a tactical genius. He commands every Maverick Hunter mission.

When the previous commander of the Maverick Hunters resigned out of guilt for the casualties of the Great Repliforce War, Signas was chosen to take the reins. The latest non-combat Reploid created with an incredibly precise CPU, Signas has gained the trust of the organization with his cool judgment and level-headed leadership.

Soon after Signas became the commander of the Hunters, the Eurasia emergency broke out. He handled it professionally, always remaining cool in tough situations and never letting emotion destroy his ability to find the best strategy. During the Nightmare outbreak, he remained calm and focused while the Nightmare wreaked havoc on Reploids everywhere. During the subsequent Red Alert crisis, he maintains his overall cool demeanor, even in light of X's refusal to fight for a time. It is also Signas who is always there lately to tell X to cool down when he starts overreacting.

He seems to care deeply about his subordinates and both trust and know them well enough, as seen when he decided to observe Zero rather than keep him apprehended after his compatibility with the Sigma Virus was noticed.

Despite the fact that the Archie Comics Mega Man series had yet to adapt a single game of the Mega Man X series, Signas appeared on the cover of Sonic Boom #8 alongside Alia and Sticks the Badger in the Worlds Unite crossover, despite the fact that he and Alia are nowhere to be seen in the crossover, only being mentioned by X in Sonic Universe #77.

Signas, as he appears in Mega Man X5-X7 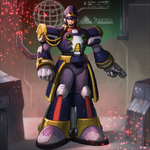 Developer Comments
There's been Irregular Hunter organizations in previous games, but we've never seen anyone from them outside of the Hunters, so this time I wanted to add some depth to that area. Bearing in mind ties to the previous games, I considered a young(?) Signas having the previous commissioner retire in the sense of taking responsibility for deciding on the Repliforce. Hm? What kind of person is the former commissioner? Well, he has whiskers and looks important, so maybe he's like General? (grin)

Designer Comments
Him being an officer, I was worried he'd end up resembling Colonel, but I was strangely aware of it becoming an odd tale of not being able to determine his role from his form, so I boldly gave him a form that was definitive. His big shoulders and the six crystals on his chest convey his "importance level."[1][2]