Silk Shot, also known as Scrap Shoot (スクラップシュート, Sukurappu Shūto) in Japan, is the weapon that X obtains from Morph Moth in Mega Man X2 and Mega Man Xtreme. When equipped with this weapon, X launches hunks of garbage. This weapon's behavior and power vary from stage to stage, but the most common form is a chunk of scrap metal that arcs downward and explodes into diagonal shrapnel. When charged, a huge mass of junk collects on X's buster, creating a large block that shields him slightly. Releasing fires it in a projectile path. When charged up in certain unmarked rooms, it will instead pull a bunch of energy or weapon capsules out of the walls for X to collect.

This weapon is Magna Centipede's primary weakness, as hitting him with either a normal or charged version of this weapon will destroy his tail, disabling some of his primary moves with it. In Mega Man X2, all three X-Hunters more or less have a weakness for this weapon as well, but each X-Hunter will take more damage from a specific type of projectile fired from Silk Shot than another, depending on which stage the boss is fought in.

In Mega Man X2, when the player enters a stage, the behavior of Silk Shot in normal fire will depend on which stage they have selected. There are four types of projectiles: scrap metal, rocks, leaves, and crystal.

Scrap Metal: A piece of scrap metal that explodes upon hitting the ground, wall or an enemy. The most common version of Silk Shot, found in almost all stages.

Rock: Rocks fired from Silk Shot will bounce a slight bit on the floor once before exploding. These projectiles are found only in Bubble Crab and Flame Stag's stages. Agile takes a considerable amount of damage from this specific type of projectile when fought in those two stages.

Leaves: Leaves fired will arc upward a bit, leaving a trail of leaves behind before disappearing. When charged, X fires a giant pile of leaves that disintegrates upon hitting a wall or the ground. This is a weak version of Silk Shot and is available only in Wire Sponge's stage. Violen takes a considerable amount of damage from this specific type of projectile when fought in that stage.

Crystal: A crystal shard fired that bounces along the floor until it hits a wall or an enemy, exploding into tiny crystal shards upon doing so. Available only in Crystal Snail's stage. Serges takes a considerable amount of damage from this specific type of projectile when fought in that stage. 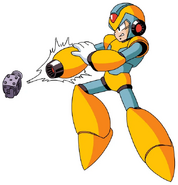 Retrieved from "https://megaman.fandom.com/wiki/Silk_Shot?oldid=339371"
Community content is available under CC-BY-SA unless otherwise noted.