In Mega Man X, the Sine Faller drops down certain ceiling holes. It will fly down across the screen in a zig-zag pattern and try to crash into X. It will retreat back into the top of the screen if it hits X, if X gets too far from it or if the screen pans, having it get too close to the top of the screen. If none of these happens, it will keep flying down toward the bottom of the screen while trying to stay close to X. It can be found in Boomer Kuwanger's stage and in the first three stages of Sigma's fortress.

Sinedropper, known as Sine Faller in Japan, is slightly larger than its Mega Man X counterpart. Sinedropper has a claw hanging from the bottom that holds a Toxic Bomb, which can cause Virus status. It can run away in any turn after launching its Toxic Bomb. Unike the original, they can attack with shots.

A Sinedropper is available from the beginning in the Deployment Center.

Zennydropper, known as Zenny Faller (ゼニーフォーラー, Zenny Faller) in Japan, is as Sinedropper that holds a Zenny bag instead of a bomb. The amount of Zenny doubles for each turn (as maximum 6400 Zenny) Zennydropper take in battle, beginning in its second turn. Has a high evasion rate and has a high chance of fleeing. It can run away from his second turn onwards.

Gift Box (ギフトBOX, Gift Box) is a variety of Sinedropper that holds an item. Dropped item changes depending number of turns the Gift Box takes in battle, beginning in its second turn. All drops have 100% rates. Has a high evasion rate and has high chance of fleeing.

A Sine Faller appears on the Variant Cover of Mega Man #40. 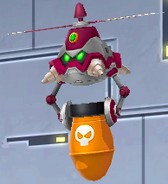 A Red Sinedropper, as seen in Rockman X DiVE.
Add a photo to this gallery

Retrieved from "https://megaman.fandom.com/wiki/Sine_Faller?oldid=328471"
Community content is available under CC-BY-SA unless otherwise noted.