"Challenging my unit was both foolish and reckless! You are nothing more than my prey... One that is soon to be retired!"
―Slash Beast, Mega Man X4

Slash Beast is a tall Reploid with the head and claws of a lion. His armor is a sandy brown, and he has the Repliforce insignia on his shoulder.

Slash Beast shows dauntless courage in battle, fearing no one and loving the tension of a good fight. He appears to care little for status, loyalty, or morality, having joined Repliforce just so he could fight. In the manga, he is especially ruthless and his brave facade fails when he begs for his life in front of X.

Slash Beast is the captain of the Reploid Army who only enlisted in Repliforce to freely exercise his combat abilities. During the Great Repliforce War, Beast was put in charge of guarding Repliforce's military supply train.

The battle can be easy or hard depending on what character is being played. As X, the Ground Hunter is the best choice. The first hit will break his claws off, disabling his Twin Slasher attack, and any additional strike will cancel his attacks, trapping him in a loop. Zero has his work cut out for him, as he'll need to keep moving to avoid the charges, slashes, and (when his health is low enough) avoid getting grabbed and shaken like a ragdoll. Zero can hit him with Raijingeki if there is a clear shot. Also, if Zero has his Tenkuuha ability, he can neutralize Slash Beast's Twin Slasher.

Most bosses show the ability the player will gain during the battle. For X, his Twin Slasher is identical to the crescent energy generated by Slash Beast's somersault kick. For Zero, his Shippuuga comes from Slash Beast's charge attack when at low health.

When playing as X

Slash Beast: Challenging my unit was both foolish and reckless! You are nothing more than my prey... One that is soon to be retired!

When playing as Zero

Slash Beast: You dared to attack my unit?! I'm gonna enjoy fighting you!

Slash Beast appeared in the Worlds Unite crossover event, in which he and his fellow Mavericks were revived by Sigma and fought against the unified heroes assembled by X, Sonic the Hedgehog, and Mega Man.

He was revived by the Extreme, becoming more powerful, but is defeated by X.

Slash Beast appears in the manga version of X4 as a member of the Repliforce, just as he was in the game. Prior to the coup d'etat, he is seen in a flashback assisting Zero on a mission to stop a dangerous volcanic eruption.

Beast leads his Repliforce freight train on a rampage throughout a city, destroying a smaller train in its path along with some buildings and structures. After Iris is critically injured and in a stasis pod because of Cyber Peacock's self-destruct causing computer terminals to blow up near her, the only way for her to be saved is with a special vaccine. The vaccine chip is in Beast's possession on the train, so Zero attacks it and kills several of Beast's underlings along the way.

Beast is very ruthless in the manga with little care for his underlings. When one of his subordinates tells Beast that one of their Repliforce trains had been destroyed by Zero's attacks, he ruthlessly murders the soldier by slicing him apart and then angrily shouts the soldier stained the Repliforce flag with his failure. Zero continues his mission to reach Beast and the vaccine, but X confronts him first wearing the Ultimate Armor that he got from Dr. Light's capsule. Beast confidently replies that he considers X to be nothing more than prey, and that he'll have fun killing him. He lunges at X, who then effortlessly kills him with his Buster. The power from X's attacks leaves Beast's entire body been blown to smithereens apart from his right hand which is holding the vaccine in its palm. X says Beast begged for his life before he killed him, which X found ironic since he had so casually murdered one of his Repliforce subordinates moments earlier. 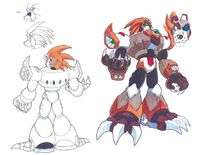 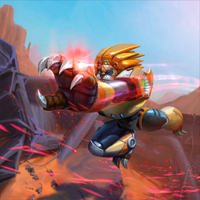 Retrieved from "https://megaman.fandom.com/wiki/Slash_Beast?oldid=351175"
Community content is available under CC-BY-SA unless otherwise noted.