Slide Cannon (スライドキャノン, Suraido Kyanon) is a defense cannon used to attack aerial enemies. Its designer seemingly used German anti-aircraft cannons of the 1940s as a reference.[1] It appears on moving platforms along the outer walls of Boomer Kuwanger's tower stage in Mega Man X. When destroyed, their platforms serve as stepping stones for X. This enemy also has Ladder Yadders with it in its area. The Slide Cannons and the Ladder Yadders are both weak against Homing Torpedo as the missiles can home in on them and take them out with one single shot each.

Slide Cannons appeared in Boomer Kuwanger's tower in the Rockman X manga, damaging the aircraft used by X to enter the tower. A Slide Cannon appears on the Variant Cover of Mega Man #40. 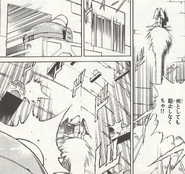 Rockman X manga
Add a photo to this gallery

Retrieved from "https://megaman.fandom.com/wiki/Slide_Cannon?oldid=307044"
Community content is available under CC-BY-SA unless otherwise noted.