"You dodged a bullet there. But you won't get a second chance, Rockman."
―Snake Man, Super Adventure Rockman

Snake Man (スネークマン, Sunēkuman) is a Robot Master with a snake motif created by Dr. Wily and Dr. Light to investigate narrow areas and survey topography on uninhabited planets marked for development. With his quick and lightweight body, Snake Man was well-suited for work on any kind of terrain. However, this caught the attention of Dr. Wily, who stole him, reprogrammed him into a combat robot, and sent him to work in order to fulfill his schemes.[1] Snake Man is also the first Robot Master to have an animal-themed design.

His Special Weapon is the Search Snake, serpentine missiles that can move swiftly along the ground and even climb up walls. In Super Adventure Rockman he is shown to be able to dig underground to stay out of sight and ambush opponents, or to avoid their attacks.

Snake Man is intelligent and shrewd, but he can also be tenacious. He enjoys actively hunting and cornering his prey like a snake, which puts him at odds with the fair-minded Hard Man. He enjoys the company of Toad Man, for whom the feelings are unfortunately not mutual, and has a hatred of slugs.

Snake Man is one of the eight bosses. He follows a simple attack pattern of traveling back and forth across his room, jumping over the elevated area in the center as he does so and firing two Search Snakes when he stops on a side of the room opposite to Mega Man. However, as he runs from wall to wall he stops short a good distant from the wall itself before turning around, leaving a somewhat safe area for Mega Man to stand in.

A good strategy is upon entering the room is to just keep Mega Man positioned in front of the shutter, as standing in this position (close to a wall) will have Snake Man always turning around and running back the way he came. This will only make it necessary to focus on attacking Snake Man and jumping over his Search Snakes. His weakness is the Needle Cannon, but he can also be easily defeated using the Mega Buster. He is also weak to his own weapon, the Search Snake, but it can be only used in the rematch against him in Wily Castle. Shadow Blade also does decent damage.

Snake Man is one of the first four bosses. His strategy is the same from Mega Man 3.

Snake Man is a balanced player with a good tackle. In Tournament mode he is a member of the Cut Man, Wood Man, Needle Man, Pharaoh Man, Enker, and Proto Man teams. In League mode he is part of the Elec Man and Dust Man teams.

Snake Man is one of the robots revived by Ra Moon in the Lanfront Ruins. He is the fourth boss from Episode 2, attacking Mega Man in an underground area. He attacks with Search Snakes and uses two rocks to protect himself. If the rocks are destroyed, he will dig underground to stay out of Mega Man's range. His weakness is the Crash Bomber.

Later in Episode 3, Snake Man is revived again, but Wily is betrayed by Ra Moon and his robots are attacked until they collapse. Snake Man and the other robots are apparently destroyed alongside Ra Moon's temple.

Mega Man Legacy Collection text: Like a tenacious snake, he steadily drives his prey into a corner... He moves about a lot, so stand still and attack.

Enemies in Snake Man's stage, a long and steep area with an eerie snake-like motif.

Amount of damage in units that Snake Man receives from each Special Weapon in Mega Man 3.

* For Magnet Missile, there is no value as the projectile bounces off Snake Man rather than hitting and dealing 0 damage.

* For Gemini Laser, it is possible to hit Snake Man with the projectile once it has bounced off a wall.  If fired directly at him, the laser reflects and splits in two.

In Ruby Spears' Mega Man animated series, the design of Snake Man's head and arm cannon are different. His eyes are yellow with red slitted pupils, and instead of lips his mouth is a plate that opens and closes when talking, and he often hisses when doing so. The eyes on his helmet are also different, and he has circular ears like other robots. The Search Snakes are fired as projectiles that can chew through many surfaces and objects.

Except for Cut Man and Guts Man, Snake Man is one of Dr. Wily's robots that had the most appearances in the series, being present in the episodes "Bot Transfer", "Campus Commandos", "Showdown at Red Gulch", "Brain Bots" and "Mega X".

A recurring joke is the use of the line "Try this/these on for size!" whenever the Search Snake is first used in an episode by a character, be it Snake Man, Mega Man, or even Mega Man X.

In the story "Metal Heart" from Mega Man Megamix, Wily orders his robots from Mega Man 3 to go after Yellow Devil MK-II, which is out of control, and they make a truce with Mega Man to stop him. When Yellow Devil MK-II created a tunnel to escape, Snake Man, Beat and Tango go after him, but they argue and lose sight of him. Later, Snake Man, Top Man and Spark Man help Shadow Man save Mega Man when he was thrown from the building.

In Mega Man Gigamix vol. 1, Snake Man uses Search Snakes to map the space station in the story "Asteroid Blues", which is based on the events from Mega Man 3. In the stories from volumes 2 and 3, he assists Dr. Wily and the others in the battle against the Stardroids.

After Snake Man spots Mega Man in the woods, he sends his minions to attack, and later appears himself, surprising Mega Man with his Search Snakes. He is the first boss defeated by Mega Man. 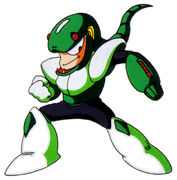 Front, side, and back view of Snake Man. 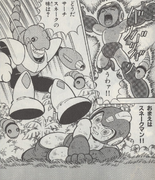 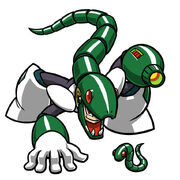 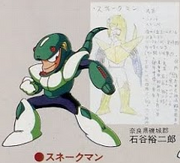 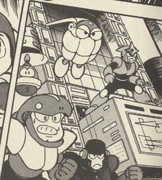 Snake Man in the Rockman 4 manga. 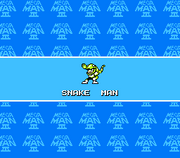 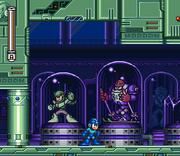