Keeper of the Electronic Labyrinth

He appears to be a rather wise, old figure within the ranks of Red Alert, with plenty of knowledge to spare about the Maverick Hunters and Axl.

Some of the challenge in this battle stems from the long, but narrow battlefield, and the close, overhead camera angle that makes dodging attacks difficult. Anteator himself is a slow, easy target, but this is balanced out by his tendency to quickly shift his position out of reach when damaged, fire off attacks in rapid succession and liter the battlefield with hazards.

Anteator gains use of certain attacks in stages as his health drops to certain amounts:

Anteator's weaknesses are X and Axl's Moving Wheel or Zero's Zankourin, but his tendency to move around the column makes it difficult to hit him with either. Other attacks such as Volt Tornado, Raijinshou, Gokumonken, or even some of the characters default weapons are more effective against Anteator damage wise. Especially X's charged buster shots, as they can strike Anteator through the column and do sizable damage.

X: How long must this madness go on!

Snipe Anteator: Hahaha! Let me ask you - how long has this madness been going on?

Snipe Anteator: The annals of history contain endless records of war... The "madness" will never end.

X: You're wrong! We can create a world without war. Utopia is not just a dream!

Snipe Anteator: You can't build a utopia on top of the graves of rebels like myself.

Snipe Anteator: I see data buried deep within you... Is it memories of the future? Or false images of the past?

Snipe Anteator: Blue - the lies that have infested the earth. Red - those destroyed and sealed away forever.

Zero: Hm! I don't know what you saw, and I don't care either. My "true mission" is to defeat you, here and now!

Zero: I don't have time to listen to your prattling. Ready yourself!

Axl: Isn't it about time for your retirement?

Snipe Anteator: Ah-hah, this little one is a big talker! Shouldn't you concentrate on being granted Hunter status?

Axl: Ah, man! You always were good at figuring people out...

Snipe Anteator: Hohoh! Yeees. And of course, I know why you're here too. So why do you think I'm here?

Axl: Know thine enemy, is it? You're a real pain, geezer.

Snipe Anteator: Hohoh!! Now, I want you to fight like normal. I need to get good data on you, boy!

Axl: Fine with me. I'm no good at holding back anyway.

Snipe Anteator appears in Worlds Unite as part of Sigma-2's Maverick army, recreated using the power of the Genesis Portals and Unity Engines. 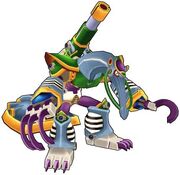 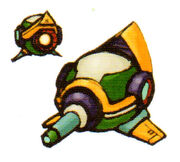 Retrieved from "https://megaman.fandom.com/wiki/Snipe_Anteator?oldid=334972"
Community content is available under CC-BY-SA unless otherwise noted.