Sniper Armor (スナイパーアーマー, Sunaipā Āmā) is a Sniper Joe pilotting a lilac jumping machine equipped with a machine gun. The armor was originally created by Dr. Light. When encountered it shoots the gun or tries to crush Mega Man. Destroying the armor will cause the Sniper Joe pilotting it to attack on foot.

In Mega Man 2, Sniper Armors appear in Flash Man's stage, one is in Heat Man's stage, two are in Quick Man's stage, and are both with and without the walking armor in the final stages.

In Mega Man: The Wily Wars, they appear in the second Wily Tower stage.

A single Sniper Armor appears in the Wily Stage (a replica of Quick Man's stage) in Mega Man on the Game Gear, but only on the Hard difficulty, being absent on Normal.

Mega Man 11
Sniper Armor D is a new model of Sniper Armor in Mega Man 11 that has all the features of the Dachone walking cannon robot. As a result, this variety moves by walking instead of jumping, and can fire its gun while walking. Like the original, it's piloted by a Sniper Joe, which will attack on its own when the Sniper Armor is destroyed. However, it is possible to destroy the Joe piloting it instead, which will destroy the entire unit instantly. It appears in Blast Man's stage and the first two Gear Fortress stages.

Mega Man Legacy Collection translation:
A giant mecha controlled by a Sniper Joe. It was originally created by Dr. Light for Mega Man to use. Attack this strong enemy with a weapon that plays on its weakness!

A large-scale robot piloted by a Sniper Joe. This new model has all the features of the classic Dachone walking cannon robot. Has decent armor, but the Joe piloting it is exposed.

Amount of shots/hits from Special Weapons it takes to destroy a Sniper Armor. 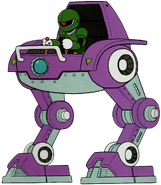 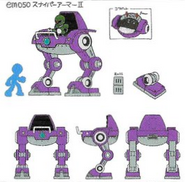 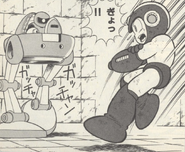 Mega Man riding a Sniper Armor from a defeated Joe.[2]