Snow is a hazard from the Mega Man franchise. Large amounts of snow can slow down the player's movement and make the view difficult. Enemies like Shrimpolin, Variant Claw and Snowlbit hide under snow.

Appearances of snow as a gimmick. This doesn't include background appearances that have no effect on the gameplay, like Blizzard Man's stage in Mega Man 6. 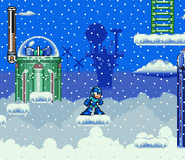 Retrieved from "https://megaman.fandom.com/wiki/Snow?oldid=236589"
Community content is available under CC-BY-SA unless otherwise noted.