Snow Shooter (スノーシューター, Sunō Shūtā) is an enemy Mechaniloid that appears in Chill Penguin's stage in Mega Man X and Mega Man Xtreme, being the last defense before his room. While it appears to be throwing snowballs, it actually throws white iron balls.[1] Sometimes it just throws regular "snow" balls, other times it rolls them on the ground and causes them to grow by accumulating snow while descending.

Snow Shooter appeared in the Rockman X manga and in Sonic Universe #76. 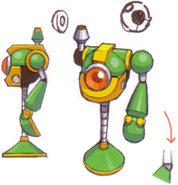 Snow Shooter in the Rockman X manga.
Add a photo to this gallery

Retrieved from "https://megaman.fandom.com/wiki/Snow_Shooter?oldid=276336"
Community content is available under CC-BY-SA unless otherwise noted.