Strongarm of the Deepest Green

"We...We have already strayed from the path. Now all we can do is stay true to our beliefs, wherever they might lead us."
―Soldier Stonekong, Mega Man X7

He dwells within the Deep Forest, and acts somewhat like a medieval knight. He is one of three Red Alert members who is fully aware that he is being manipulated by "the Professor" (the other two being Red and Tornado Tonion). However, unlike the other two, he doesn't seem to regret being used for evil (something noted by and scolded by Axl), as he only fights for loyalty, not justice.

This battle takes place on what is basically a 2-D arena wrapped around into a ring. Stonekong will run around this ring. He has a large stone sword, as well as his Gaea Shield. His sword can be destroyed, and this may make things easier.

X: Why...Why do you insist on fighting?

Soldier Stonekong: First I ask you! What is strength? What is war?

X: A method for imposing one's will upon another.

Soldier Stonekong: Precisely! Now, no more talk! Let our swords speak for us! Only the victors will be viewed as righteous in the eyes of history.

Zero: You're something else.

Soldier Stonekong: So, you are Zero, the grace of whose attacks is like no other... I am Stonekong. I live only to fight. Just like you.

Zero: No! There's more to life than fighting!

Soldier Stonekong: Silence! I've never seen a battle Reploid as perfect as you. We shall have the fight to end all fights. En garde!

Axl: The great and wise Stonekong. How could you, of all people, do such a thing?!

Soldier Stonekong: We...We have already strayed from the path. Now all we can do is stay true to our beliefs, wherever they might lead us.

Axl: But what Red Alert is doing is wrong.

Soldier Stonekong: I know that! Both you and I know they are being manipulated! I fight for loyalty. Ready yourself! 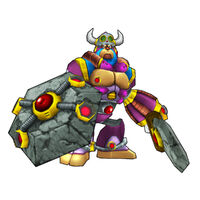 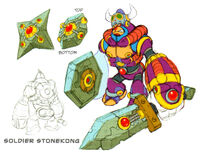 Concept art of Soldier Stonekong.
Add a photo to this gallery

Designer Comments
"I was in charge of Stonekong's design. I was going for the sort of sophisticated design reminiscent of 'X1' and the robot animes from the 80s, the kind of thing the kids love. I was kind of hoping that my design would influence the other designers to an extent, but I came into 'X7' a little late in the game, so it was too late for that." - Tatsuya Yoshikawa [1]

Retrieved from "https://megaman.fandom.com/wiki/Soldier_Stonekong?oldid=219055"
Community content is available under CC-BY-SA unless otherwise noted.