"I wrote this song for all of my fans who are always cheering me on... And for my very special and most dear friends who always support me through all the good and bad times! This song is called... "Shooting Star"."
—Sonia, Mega Man Star Force 3.

Sonia Strumm, known as Misora Hibiki (響ミソラ, Hibiki Misora) in Japan, is a main heroine in the Mega Man Star Force series. She's an all-star idol who can EM Wave Change with Lyra to become Harp Note. She's registered in Project-TC as No.004.

Sonia is 143 cm tall, her birthday is August 2, and she was born in Bayside City. Her hobbies are singing and cooking (tastes may vary), her favorite food is crepes.[1]

As an idol, Sonia is portrayed as energetic and full of smiles. The real Sonia is energetic too but is haunted with dark thoughts, never forgetting the loss of her mother and the difficult state of the idol industry. Although she gains a genuine smile as the story goes on, she still looks up to Geo Stelar for self assurance.

Sonia can be a bit bold, even asking Geo to two dates directly. She uses these emotions and connections as inspiration for her songs. She is also shown as a defeatist at times. When she's shown a seemingly losing situation, she usually leans for the worst case scenario. Even pushing Geo aside so she can handle it herself without leaving the burden to her friend.

In Mega Man Star Force 2, if the player went to Sonia's personal page after forming a BrotherBand with her and looked at her secret message, it'll say there's this cute boy she likes which the player will assume is Geo.

Sonia's mother passed away because of a disease that made her critically ill. It's said her mother was sick in bed a lot for a year. Little is known about Sonia's deceased mother, as she never appeared except for Sonia's story about her mother on AMAKEN's roof. Sonia says she'd prefer to "compose songs for her deceased mother in Heaven", but is unable to do so due to her idol obligations. This creates a multitude of issues between Sonia and her manager, Chrys Golds.

In an attempt to hide from her manager at Vista Point, she's discovered by Geo Stelar. He tries to cover for her until the manager finally finds her. Lyra encountered her when she fought with her manager. Together, they unwillingly Wave Change into Harp Note, and Sonia is forced to face Mega Man. After the battle, Sonia cries her heart out and relating to her plight, Geo asks to form a BrotherBand. Sonia became Geo's first BrotherBand and the first one to know he's Mega Man. She then announces her idol retirement, going out with her own song, "Good Night Mama".

Before leaving, Sonia told Geo that he can find a "new him" too. It was the final push Geo needed to return to school proper.

Sonia as Harp Note appears again to rescue Mega Man and Luna in Echo Ridge Elementary from a Jammer attack. After the incident, Sonia asks Geo to a date at Time Square on another day. When the day came and as the date goes further along, they discover that Luna Platz was eavesdropping. When Luna gets lured to become Queen Ophiuca, they halted the date to stop her. Sonia became knocked out due to Ophiuca's snake, leaving Mega Man to stop her alone.

When Omega-Xis leaves Geo under bad terms, he enters a slump and Luna and Sonia tried to get him to open up. He ends up breaking their Brother Bands. Sonia and Lyra soon finds herself being attacked by the FM-ians and Omega-Xis tried to come to the rescue but they're both beaten. Geo, finally made his resolve, soon comes in and reunites with Omega-Xis to become Mega Man. They then recreate their Brother Band. When Geo is about to go off to fight Andromeda, Sonia insists on going but tells her to stay behind to protect the people on Earth.

In the two months since the first game, Sonia's come out of retirement.[2] On the Air Display boards, Sonia is shown saying, "When you're tired, give yourself a boost with Soniavita D. I'll always be here cheering for you.".

Some time after the Yeti Blizzard incident, Sonia appears and asks Geo out, but this time to Wilshire Hills. It is there that Sonia admits what made her want to go back into singing, which was her inspiration from Geo's attitude. She recites a quote that Geo said when Mega Man defeats Harp Note in the first game, "I know how you feel, and I want to help you." That is what also made Lyra turn over a new leaf. They then head to the IFL Tower and check its museum. While checking out the exhibits, an attack constructed by Solo occurred. Sonia and Geo EM Wave Change and try to stop him from stealing all of the artifacts. They succeed, but Omega-Xis accidentally swallows a OOPArt, Solo's original target. When Solo attacks Echo Ridge, he spirits away all of Geo's friends to provoke him. Sonia was one of the victims.

Sonia as Harp Note later resurfaces when Mega Man enters the Bermuda Maze. She refused to return home with him, breaks their BrotherBand and attacks him. She later comes to Mega Man's rescue when he becomes overwhelmed by Rogue's new power. There she reveals to have sided with Hollow and his crew. Mega Man, convinced by Luna that Sonia has not truly turned on them, returns to the Maze and she fight him. After Harp Note’s defeat, she reveals that she was persuaded by Hollow to go along with him because he said that they would not hurt Mega Man anymore. As the battle of Rogue showed, this was a lie. Knowing her mistake, she teams up with Mega Man and reforms their BrotherBand.

The two travel the Bermuda Maze up to the entrance of Vega's hideout. There they encounter Hollow, revealing it was a trap to lure Mega Man. He tells Harp Note to stand back, fights Hollow and comes out victorious. Instantly after, Rogue appears and challenges Mega Man. In a desperate attempt to protect him, Harp Note blasts Mega Man to the next room. This leaves the two to fight but Rogue absolutely decimates her. Mega Man and Rogue duke it out, resulting in the two knocked out after the fight. This gives Dark Phantom the opportunity to steal Mega Man's OOPart, making the trap a success. Using her last strength, she carried Mega Man home but was hospitalized afterwards, being in worse shape than Mega Man.

During the rise of the continent of Mu, despite still recovering, she goes to Luna and the group to delivering the knowledge of the end of the world and Vega's only Brother. She stays behind with Luna and the group as Geo heads off to stop Le Mu.

Sonia first appears after the Spade Magnes incident to meet with Geo but was quickly recognized by rabid fans. Upon escaping via EM Wave Change, she's registered under Transcode 004. She invites Geo and his friends to participate in a TV recording, a part in drama show she's in, as well as a live concert of her’s at WBG Studios. Just as Sonia starts off the concert, Diamond Ice freezes the concert stage and halts the show. Eventually, Mega Man defeats Diamond Ice and saves Sonia's concert. At the end of her performance, she dedicated a song "Shooting Star" to her friends that have supported her. The name of song and lyrics are based on Mega Man (Shooting Star Rockman) and Geo helping her in the first game.

At Alohaha it is revealed that Sonia really loves eating BBQ. Not only that, but during that event, it was also revealed that she could swim. If the player chose to save Sonia's bag (revealed to be gifted by a fan), there will be a scene with Geo and Sonia. Geo talks about how he is afraid of the ocean at night, then Sonia offers to hold his hand so he isn't (in which he wholeheartedly agrees). Then they go on to talk about the times they had together and she thanks Geo for being her first brother. Geo was happy he has someone to fight alongside him, so he's not alone. Sonia recognizes that Geo always believes even she worked for evil in Mega Man Star Force 2. When Geo states a new fight is about to start, Sonia instantly says she'll fight too, they're Brothers after all.

For the rest of the game, Sonia assists Mega Man in his quest while he combats Dealer, she becomes part of the Satella Police Commandos, often traveling with him and members of WAZA.

In the anime, her personality is quite different than that in the games. In addition to being rather cheerful and mischievous, she has a very strong personality and is quite easy to anger. Since her mother isn't mentioned in the anime, she just wants to sing songs that she wrote herself. She is also rather impulsive, caring not about the problems she puts on her manager.

Sonia has two known songs. The first, "Good Night Mama" was sang before her official retirement. The second one "Shooting Star" was sang after the defeat of Diamond Ice, and it is the only song to have the full lyrics in the in-game text. 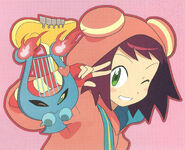 Sonia VS Luna in Hanetsuki.

Luna and Sonia from Capcom Girls Calendar 2011 by Yuri Kataiwa.

Sonia's page on the old Japanese website, confirming her birthday. 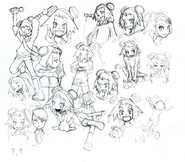 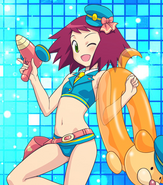