Spade Magnes, known as Spade Magnets (スペード・マグネッツ, Spade Magnets) in Japan, is the first boss from Mega Man Star Force 3. He is the Noise Card-corrupted form of the Wizard Magnes.

Spade Magnes was originally a Wizard named Magnes, who helped watch over a rocket that he was supposed to pilot into space with his brother, Coil. He has a cheerful, can-do attitude and loves his job. Queen Tia and Jack corrupt him with a Noise Card, making him go out of control, turning him into Spade Magnes, and causing the experimental rocket to malfunction. Though, Mega Man defeats him and turns Magnes back to normal. After that Magnes gets a little emotional and apologizes for the trouble he caused, he just did not want to be worthless, but Mega Man tells him that he is not and he is the best Wizard he ever met.

Spade Magnes is the first boss in the game, and possesses these few attacks: 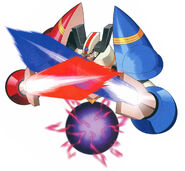