"You think that excuses anything?! I'm already losing eight of my brothers to the plan. That can't be helped--we were built to serve! But the others--my line of Robot Masters--THAT'S ALL ON YOU!"
―Spark Man, Mega Man Issue 43 (Archie Comics)

Spark Man (スパークマン, Supākuman) is a Robot Master from Mega Man 3 created by Dr. Wily and Dr. Light to charge electricity. Spark Man is designed to resemble a spark plug, and does not have hands. In place of them are two high-voltage electrodes, capable of producing powerful electric shocks and channeling his Special Weapon, the Spark Shock. This enables him to fire sparks of pure electrical energy in multiple directions, that can quickly immobilize opponents in their tracks.

Friendly to his comrades, he usually helps to charge them up when they need extra energy, and can generate twice as high voltage as Elec Man- however, he tends to be scatterbrained, and thus is not as good at focusing his power. He also has an unusual fascination with catfish and electric eels due to their unique ability to naturally produce electricity, but tends to get depressed when left alone for long periods of time.

Spark Man is one of the eight bosses. In battle, he will jump to the other side of the screen, sometimes stopping to shoot Spark Shocks on all directions and then flinging a great Spark Shock at Mega Man. The player can shoot at him while he jumps, but they have to be careful to avoid being touched by him, so it is better to shoot him from afar. The normal sparks can be avoided just by getting out of the way, but the great spark has to be avoided by jumping from afar him when he is about to fling it. After that, he is more vulnerable to attack. He will repeat the pattern over and over. When he jumps, he may jump up to four jumps, the needed number to reach the other side of the screen.

His weakness is the Shadow Blade, which can hit him while he is at the other side or diagonally above Mega Man. He is also weak to his own weapon, but it makes it harder to hit him, than the Shadow Blade, and like the other Robot Masters, it can only be used on him on the rematch on Wily Castle. Any of his weakness defeats him in seven hits.

Spark Man is one of the first four bosses from the Game Boy Mega Man III. He acts like his appearance in Mega Man 3.

Spark Man is one of the sixteen robots revived by Ra Moon in the Lanfront Ruins. He is the fourth boss from Episode 3, being the last revived Robot Master to fight against Mega Man. After his defeat, Mega Man takes his Spark Shock chip, but as he prepares to leave, Spark Man regains consciousness and uses his electrodes to electrocute Mega Man, weakening him enough for him to be captured.

After taking Mega Man to Ra Moon's inner sanctum, Ra Moon revives all the Robot Masters again, with the exception of Shadow Man. However, Ra Moon betrays Wily, and after being attacked, the Robot Masters give their energy to Mega Man to enable him to defeat it, becoming inactive afterwards. It is not known what happened to Spark Man and the other Robot Masters, but it can be assumed that they were apparently destroyed alongside Ra Moon's temple.

Spark Man appears as one of the Robot Masters aiding Apollo and Luna's forces under Dr. Wily's orders. He first appears alongside Elec Man as one of Cancer's bodyguards, in an aerial location above the Indian Ocean. He then joins several other Robot Masters-Flame Man, Frost Man, and Metal Man-in protecting the doctor's Wily Machine in Saudi Arabia.

Translation: He has twice as much power as Elec Man. However, his thinking program seems to be uneven.

Amount of damage in units that Spark Man receives from each Special Weapon in Mega Man 3.

Spark Man appeared shortly in episode 4 "Mega-Pinocchio" and later reappears in episode 8 "Cold Steel". In "Mega-Pinocchio", Spark Man has no lines and appears only in the scene where Wily's robots are attacking a skyscraper.  In "Cold Steel", Spark Man disguised himself as the drummer of a rock band known as Cold Steel. Along with Gemini Man and Gyro Man, they produce rock music able to hypnotize the citizens of New York to create a satellite. Spark Man appears with his mouth covered by his helmet and he has black eyes instead of blue eyes.

Spark Man was registered as the robot responsible for recharging the other robots who were sent out to the foreign planets, but like the other Wily robots, Spark Man is also a combat robot working under the guise of an industrial robot. Spark Man boasts an electricity output level twice that of Elec Man's. The giant capacitor that makes up his upper torso allows Spark Man to discharge a large amount of electricity at once, and this electrical attack is known as the Spark Shock. Spark Man must convert his capacitor to a direct current system in order to recharge, but repeated charging and discharging leads to instability in his internal systems. To avoid such instability, Spark Man must constantly be shedding little bits of electricity.

In the manga Mega Man Megamix and Rockman Remix, Spark Man appears in the story Metal Heart, where the eight robots from Mega Man 3 are sent to retrieve the rogue Yellow Devil MK-II. 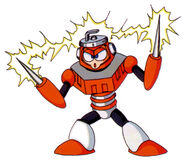 Front, side, and back view of Spark Man. 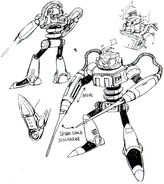 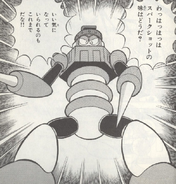 Spark Man's silhouette in the Super Smash Bros. for Nintendo 3DS / Wii U trailer
Add a photo to this gallery 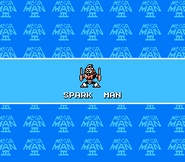 Spark Man, as Cold Steel's lead drummer
Add a photo to this gallery

Retrieved from "https://megaman.fandom.com/wiki/Spark_Man?oldid=261407"
Community content is available under CC-BY-SA unless otherwise noted.