MMKB
Register
Don't have an account?
Sign In
Advertisement
in: Articles with hAudio microformats, Reploids, Mavericks,
and 10 more
English

Spark Mandrill is a simple-minded soldier who is content to follow the orders of those in positions of power above him. He is also quite lazy, leaving most of the fighting to his underlings while he wastes time gorging himself on electricity.

Spark Mandrill was a Maverick Hunter that served in the 17th Elite Unit, directly under Sigma's command. When Sigma started his rebellion, Mandrill blindly followed his orders and joined him in the destruction, being labelled a Maverick for it.

Spark Mandrill was ordered to take over a power station to secure an energy source for Sigma's forces and cut off power to the cities. Because there was only light resistance, Mandrill left his Mechaniloids to hold the fort while he relaxed at the main generator. He was then confronted by X, who defeated him.

Spark Mandrill reappeared as a boss in the third area of Sigma's Hideout.

A digital reconstruction of Spark Mandrill appeared in the Mother Computer as an obstacle to X in Normal Mode. He was also available for a rematch in Mega Man Xtreme 2's Boss Attack mode.

As his name implies, he has an electric weapon known as Electric Spark. He can be surprisingly fast on the ground due to his dash punch attack, and can cover the air by climbing on the ceiling as well. Mandrill's weakness is the Shotgun Ice; in fact, it can freeze Mandrill, forcing a repeat of his action cycle.

Spark Mandrill appeared with Vile in the "Mega X" episode from the Mega Man animated series. He only speaks three lines in the whole episode, so he doesn't get much personality. When he does speak, he uses a Russian accent. Like Vile, he's depicted as being more than a match for every robot in the present, with Mega Man being unable to even damage him. He was, however, no match for Mega Man X. Spark Mandrill was also shown to be able to paralyze both Mega Man and Roll.

Spark Mandrill has a brief cameo in issue #35, seen among Sigma's group of Maverick Hunters. He was later cloned by Sigma using the power of the Genesis Portals and Unity Engines to become part of a massive army of Mavericks during Worlds Unite. After briefly facing Sonic the Hedgehog, Mega Man, X and their allies, he and most of his comrades were dispatched to invade other worlds by Sigma.

Spark Mandrill also appears in the Rockman X manga, where he is the second Maverick fought by X, and Sigma used a holographic machine to kill him after his defeat.

In the Carddass, Rockman X Mega Mission 2, he is revived as "Spark Mandriller L". He is now dark blue with black, red and yellow details, his shoulders have drills instead of lights, and he has spikes in the back of his hands, which seems to have joints to move forward. 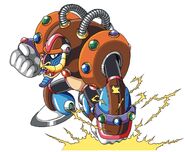 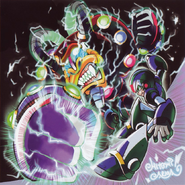