Lighting King of the Bullet Fists

"I'm not the smartest guy around, X. But I have a feeling that Sigma is right."
―Spark Mandrill, Mega Man Maverick Hunter X

LIGHTING KING OF THE BULLET FISTS

Comes from the same 17th unit as X. Possesses immense strength and a powerful electrical shock attack, but doesn't seem to be the sharpest tool in the shed. He has obediently followed by Sigma, his superior, into the rebellion. He has attacked the city's electrical power stations, bringing the city to a halt, and has already taken control. He wreaks whatever damage he feels like, and leaves it to his subordinates to clean up the mess.

Creates high-pressure voltage within the Buster and fires it. If the electric spark hits an enemy or a hard surface it splits in half, ricocheting up and down in opposite directions.

Spark Mandrill was a Maverick Hunter in the 17th Elite Unit, the same unit as X and Zero, under the command of Sigma. When Sigma initiated his Maverick rebellion, Spark Mandrill followed him out of loyalty.

Spark Mandrill was put to work occupying the Electromagnetic Power Plant, hijacking all energy production and wreaking havoc however he pleased. When confronted by X, Spark Mandrill stubbornly refused to surrender and instead challenged him. He was destroyed.

In the non-canon Vile Mode, Spark Mandrill assumed Vile was part of Sigma's rebellion and was confused by his attack on the power plant. Vile angrily destroyed him, musing that any plan involving X is incorrect.

Note: Attack names are from his original counterpart.

Spark Mandrill's boss fight is nearly identical to his Mega Man X incarnation's. He is deceptively mobile for such a large opponent, and has various ways to still damage X if he is hiding by climbing the walls. However, Spark Mandrill is also still extremely vulnerable to Shotgun Ice and can be easily stun-locked by it.

Spark Mandrill: Do you think Commander Sigma is insane, X? X: He's no commander. Not anymore. He's nothing but a Maverick now! Spark Mandrill: Now, X... You never thought that maybe Sigma was right and you were wrong? X: ... Spark Mandrill: I don't like thinking either... Maybe we can find the answer together... In battle!

Spark Mandrill: Vile? What are you doing here? Vile: I should ask you the same question. What are you accomplishing by acting as Sigma's cheerleader? Spark Mandrill: His plan's not wrong. At least... I don't think so... Vile: Any plan involving X is wrong! I'll put a stop to it! 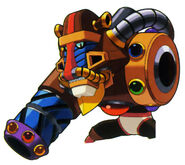 Bust of Spark Mandrill
Add a photo to this gallery

Retrieved from "https://megaman.fandom.com/wiki/Spark_Mandrill/Maverick_Hunter_X?oldid=355799"
Community content is available under CC-BY-SA unless otherwise noted.