Spark Shock (スパークショック, Supāku Shokku) is Spark Man's Special Weapon. Its system generates an energy ball that can short-circuit electronic components, temporarily paralyzing enemies. However, it is not effective against robots with insulated coating.[1] As such, a few enemies, like Magnet Man, can be damaged by this weapon.

Spark Shock is obtained by defeating Spark Man and can be used to paralyze enemies, and in some cases, damage them. The trade-off is that only two enemies can be stunned at a time, and Mega Man cannot change weapons while there's one stunned.

Spark Shock uses one weapon energy unit per use. With a full weapon energy gauge, it can be used 28 times without recharge. It is effective against Magnet Man, Doc Robot (Air Man and Bubble Man), Spark Man (2nd encounter), and Wily Machine 3 (1st form).

Like all weapons from the first three games, the Spark Shock can be used in the Wily Tower mode. It is effective against the Iron Ball and the first form of the Wily Machine.

Buster Rod G and the second form of the "Wily Machine" are immune to it.

Like Mega Man 3, this weapon is obtained after defeating Spark Man and can be used to paralyze enemies; however, Mega Man is now able to switch weapons while enemies are stunned. This can come in very handy when dealing with Shield Attackers and Jumbigs.

Spark Shock uses one weapon energy unit per use. With a full gauge, it can be used 19 times. Spark Shock is the weakness of Snake Man and Giant Suzy.

The Spark Shock is the last Special Weapon obtained by Mega Man in the game. It is Ra Thor's weakness.

Instead of using one Buster to fire spark-like projectiles, Mega Man transforms both of his Busters into long electrodes, similar to those of Spark Man himself, which he uses to emit a powerful burst of electricity above him that hits opponents multiple times, dealing a total of 15% if all hits connect (20% if fully charged). Since Mega Man uses both Busters to perform the attack however, there is a brief animation afterward showing him venting the excess heat from his arms, much like when he uses his Flame Blast Down Smash.

Spark Shock is almost useless in most cases, except against bosses who are weak to it. Its utility for stunning enemies is useful on paper, but you cannot change your weapon while the effect of Spark Shock is still on-screen, so there's no way to take advantage of the weapon, unless you can slide under the enemy if you freeze it mid-air or jump over it while it's on the ground. Spark Shock is quite useful against Bikky, who is only vulnerable while jumping, so you can freeze him and slide under without risking your safety by taking it on in combat.

Mega Man uses the Spark Shock and Gyro Attack at the same time in the episode Cold Steel. When obtaining the weapon, an electrode can be seen in its design, probably for firing the sparks. He uses it to electrocute Cut Man and Guts Man.

In the comic book series, the Spark Shock (misnamed Spark Shot) is used by Mega Man in issue 32.

The Spark Shock (misnamed Spark Shot) is only used by Mega Man when he tries several weapons against Punk, all of them being ineffective. This is also the only time he uses a Special Weapon after Spark Man's defeat. 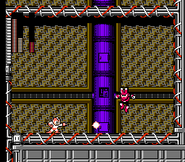 Mega Man using Spark Shock and other weapons in the Rockman World 3 manga.