Speedy Dave, known as Daisuke Hayami (速見ダイスケ, Hayami Daisuke) in Japan, is the operator of QuickMan.EXE.

Dave's most prominent quality is his love for nature, which is so extreme that he will commit acts of violence to protect it, as well as have his revenge on those who harm nature. His radical actions make him reminiscent of an ecoterrorist. This is his primary motive in the games and anime.

In the anime, he is a friendly and gentle man who is kind to others. He is also a childhood friend of Sal. Dave is also much less extreme in the anime and never planned to harm anyone, only wanting to scare them into taking action.

His personality slightly differs based on the medium. In the games, due to his high intelligence, he came across as very arrogant and confident, and becomes completely flabbergasted and complains about his loss when defeated. In the anime, however, he was calm, reserved, and soft-spoken, but cold and resolute when carrying out his plans (the latter is implied to be an act), and only shows shock when the turbines started moving again, when it should have stopped.

QuickMan was affected by the Zero Virus and was causing chaos in the bank's network. After QuickMan was stopped, Dave sent an anonymous email saying he can't reveal himself for his own reasons (as he was a member of Gospel) and thanks Lan Hikari for defeating his out of control NetNavi. In gratitude, he gives him a chip.

Dave first appears at the Okuden Dam, as a park ranger who is impressed when Lan cleans up the trash around the dam and park. However, he later reveals himself to be the operator of QuickMan and a member of Gospel. Dave attempts to blow up the Dam to preserve nature, but is defeated by Lan and MegaMan.EXE; and then Chaud and ProtoMan.EXE. Dave is then arrested by the police.

Like most former villains, he returns in Battle Chip Challenge as a competitor, no longer a member of Gospel.

Speedy Dave was featured in an episode of the anime. He was a childhood friend of Sal's, and loved nature just as much as she did. As a kid, Dave vowed to Sal that he will someday grow up to be a park ranger so that he could help preserve the natural environment. Sal has always been supportive of Dave's idealism, and is also shown to have a crush on him when she introduces Dave to her friends while blushing and stuttering.

Dave sought to protect nature so much that he joined Gospel to do it. Under the name of "Earth Avenger", he was ordered by Gospel to destroy the dam, and attempted to do so by reversing the spin of the turbines. Sal attempts to stop her friend, but is defeated and becomes his hostage. After QuickMan was disarmed by MegaMan, Dave unties Sal and reveals that he was merely bluffing and was only trying to scare the people in charge of the dam to take better care of nature. Though CutMan attempts to finish the job, MegaMan deletes him and QuickMan is able to stop the turbines before any serious damage is done. Dave leaves (likely fleeing from both the authorities and Gospel, as he is both a criminal and a traitor), but not before saying goodbye to Sal. 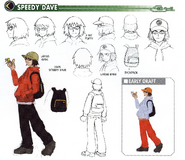 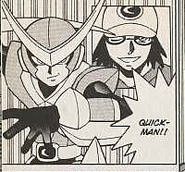 Speedy Dave and QuickMan.EXE in Mega Man NT Warrior (manga).
Add a photo to this gallery

Retrieved from "https://megaman.fandom.com/wiki/Speedy_Dave?oldid=324772"
Community content is available under CC-BY-SA unless otherwise noted.