Spiky (スパイキー, Supaikī) is a spiked wheel-like enemy in the Mega Man X series that rolls forward in an attempt to collide with the player.

In Mega Man X8, they have two varieties of movement: simply rolling forward or rolling while jumping horizontally (similar to Spiky Mk-II). When a jumping Spiky is powered-up by a MAME-Q, they gain an extra vertical jump between their normal jumps, plus a 1.5X speed increase. They appear in Noah's Park, Metal Valley and Primrose. Sometimes an abnormally large Spiky will appear, along with regular-sized Spikys, in Noah's Park Intermission stage.

Amount of shots/hits from Special Weapons it takes to destroy a Spiky.

Spiky appears in the Rockman X manga in the area controlled by Chill Penguin and as one of the Maverick minions surronding X and Zero in the forest.

In Irregular Hunter Rockman X, Kinkō Sōdā and Chill Penguin have Spikies working for them.

Spiky also makes an appearance on the Variant Cover of Mega Man #40 from Archie Comics. 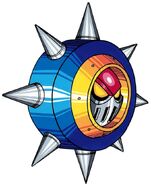 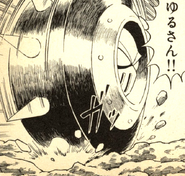 Retrieved from "https://megaman.fandom.com/wiki/Spiky?oldid=322818"
Community content is available under CC-BY-SA unless otherwise noted.