Spinning Blade (スピニングブレード, Supiningu Burēdo) is the Special Weapon that X obtains from Crush Crawfish in Mega Man X3. Then equipped, X fires two Spinning Blades, which travel a short distance forward then arc behind him, one slightly above and one below. Due to the trajectory of the blades, this weapon can be difficult to properly aim if not at close range. Since there are two blades that are present on the screen per shot, the Spinning Blade can be a very helpful Special Weapon when eliminating enemies as firing it up close to an enemy can heavily damage or destroy it as the weapon strikes twice.

The charged version sends a bladed yo-yo-like device in front of X that will stay in place even if X moves or turns around. Pressing up or down on the control pad causes the blade to rotate around X in that direction before returning. If it happens to strike an enemy that is strong enough to withstand it or is immune to it, the large blade will bounce off the enemy, dislodging itself from X's buster in the process. 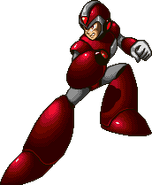