Spiral Pegasus,[2] known as Spiral Pegacion[2] (スパイラル・ペガシオン, Supairaru Pegashion) in Japan, also known as The Skiver,[3] is a Pegasus-themed Reploid from Mega Man X5. He was a young director of the Repliforce air brigade, who survived the Great Repliforce War that occurred during the events of Mega Man X4. He looked up to Colonel and General and knows Iris. He then began overseeing an Air Force base near to the west coast of Norway, known as the Reploid Air Force.

Spiral Pegasus held an Orbiter Wing needed for the Shuttle Operation to destroy the Eurasia colony. However, because of being in the early stages of the viral infection and unresolved issues with the Maverick Hunters, he refuses to cooperate and orders to be taken down in an duel without hard feelings:

If he was fully infected, he yells out for killing out of revenge: General for X and Colonel and Iris for Zero.

When Playing as XEdit

Spiral Pegasus: X! I've wanted to meet you... But considering the situation, we don't have time for small talk. Soon, the Reploid Air Force will be destroyed. You may be our only hope... But, you'll have to convince me first... Through battle...

Spiral Pegasus: You have killed the General... I'll kill you to avenge his death!

Spiral Pegasus: I've wanted to see you, Zero... I wanted to ask you something... My thoughts always come back to the Colonel. I wanted to ask you if the battle between you two was necessary. I'm not accusing you, I just want to know, that's all. I've already been infected by the Virus... I'm destined to be retired by you once I become a Maverick, so go ahead, take me down... I want to fight you for the Colonel... That's what the Colonel would want.

Spiral Pegasus: Zero! I didn't want to see you in a situation such as this... Soon the Virus will take full control of me... When that happens, you'll have to retire me. So... Fight me now, Maverick Hunter... I want to fight you for the Colonel... And that's what the Colonel would want.

Spiral Pegasus: KILL YOU. I'LL KILL YOU!! I WON'T ALLOW YOU TO ESCAPE!

Spiral Pegasus appears in the crossover event Worlds Unite. He is one of the many Mavericks recreated by Sigma-1 using his newfound powers before being dispatched to various worlds via Genesis Portals to conquer in Sigma's name. He and Toxic Seahorse go to the world of Breath of Fire III to set an Unity Engine, but they are destroyed by the heroes in that world.

Spiral Pegasus fought X alongside Sigma, Burn Dinorex, Spike Rosered, and Zero. After X applied a cure on Zero, he went on a rampage before returning to normal, defeating the three Reploids assisting Sigma.

Spiral Pegasus had a cameo appearance in the Rockman Zero manga. 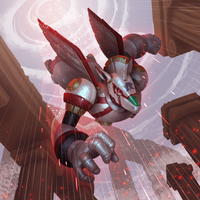 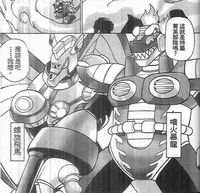 Developer Comments
This is our second shot in the fantasy series. In the previous game, X4, we went for a dragon motif, but as a rule for the X series bosses, fantasy types are not existent creatures, so if it's hard to figure out, it becomes unavailable. Well, I broke that rule again this time. (grin) His attack method was easy to imagine and he looked cool, so I decided on him fairly quickly. The fact that his attack method resembles Eagleed's is because I was heavily influenced by Cyber Mission, which I was making at the same time, so I tried making them similar on purpose.[4][5]

Designer Comments
He's a soldier, so he's in uniform (as is). I like him rather a bit, but I'd still like to rework the wings. When I was drawing this, I was listening to the theme to Captain Tsubasa over and over. [Captain Tsubasa is a classic soccer manga/anime.] Thus we have the wings (tsubasa) link.... I don't know if he'll make the best use of them or not.[4][5]

Retrieved from "https://megaman.fandom.com/wiki/Spiral_Pegasus?oldid=308872"
Community content is available under CC-BY-SA unless otherwise noted.