Pursuer from the Blue Sea

"Kee-hee-hee! You've made it this far, but this is the end of the line!"
―Splash Warfly, Mega Man X7

There seems to have been some conflict between him and Axl prior to the events of X7, as both claimed to have never liked the other when confronted with Axl as the lead character.

Even after his battleships are destroyed Warfly still occupies the partially sunken wreckage, claiming them as the ideal battleground. Warfly likes to perform hit and run maneuvers; attacking, retreating into water and then jumping back onto the platform from behind in an attempt to catch the player by surprise.

Warfly can be difficult to battle without using his weaknesses, but with them the fight becomes laughably easy. Striking him once with either Volt Tornado or Raijinshou, will cause him to cancel his current action and retreat back into the sea. Just wait for him to leap back onto the platform and repeat.

Splash Warfly: Kee-hee-hee! So you're the famous X?! I thought you were out of commission!

X: I was put back on the job, thanks to you creeps!

Splash Warfly: So you're saying we're playing too rough? Fool! This is our natural state - just like you!

Splash Warfly: Rusted old machines should stay home and play with their toasters! Kee-hee-hee, take this!

Splash Warfly: Kee-hee-hee! You've made it this far, but this is the end of the line!

Zero: Hah! Your battleship lies at the bottom of the sea. Don't you think it's about time you made your escape?

Splash Warfly: Idiot! This is all according to plan!

Splash Warfly: You've turned this into the ideal battlefield for me! Kee-hee, take this!!

Splash Warfly: I've been waiting for you, traitor!

Splash Warfly: Prepare to feel pain! I hated you from the very beginning!

Axl: Well, that makes two of us!

Splash Warfly: Why you brat! You'll pay for this!

Splash Warfly was among the various Mavericks revived by Sigma-1 during Worlds Unite, and took part in a massive attack on the Sky Patrol before joining most of his comrades in scattering through various Genesis Portals to invade other worlds. 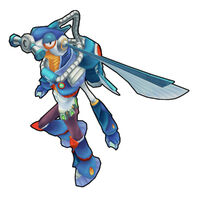 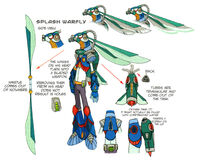 Retrieved from "https://megaman.fandom.com/wiki/Splash_Warfly?oldid=335655"
Community content is available under CC-BY-SA unless otherwise noted.