Splash Woman (スプラッシュウーマン, Supurasshu Ūman) is a Robot Master from Mega Man 9 that Dr. Light created to rescue swimmers from sinking ships, being an expert swimmer (due to her design as a mermaid) but having very poor land mobility. She possesses a beautiful voice and is fond of karaoke, but it is rumored that she has turned down numerous invitations to enter the world of show business, possibly having a dislike of large crowds. Splash Woman attacks by singing to call fish robots, tackling with her trident, and using her Special Weapon, the Laser Trident, which can emit a laser capable of penetrating tough surfaces such as shields and the hulls of ships.[1]

Splash Woman is one of the eight Robot Masters whose period of use had expired and was scheduled to be scrapped. Dr. Wily pretended to be concerned by offering to repair them, reprogramming the tricked robots to help him conquer the world.

In battle, Splash Woman will first call three groups of robot fishes to charge into the player that can be dodged by extended jumps. Then, when she is at the top of the area, she'll move around the room shooting the Laser Trident and finally try to tackle Mega Man with her trident.

Her weakness is the Hornet Chaser. The bees will fly around and can easily demolish the fish, and damage Splash Woman as she goes to the top of the screen. Take into account that after a bee kills fishes, it will continue until none are remaining and won't attack Splash Woman. However, they can still damage her if she is lured into them before they fly offscreen.

In the end credits picture, she is seen at the beach having her picture taken by Auto, having been rebuilt after the events of the game.

Displays the amount of damage in units that Splash Woman will receive from each Special Weapon in Mega Man 9.

Splash Woman's stage has a vertical bubble puzzle similar to the one from Wave Man's stage in Mega Man 5, which involve deadly spikes and Trophishes. There are also some puzzles which include more spikes and temporary platforms moving horizontally in either direction.

Splash Woman appears in the short Mega Man Megamix manga story "For Whom", included in the booklet of Rockman 9 Arrange Soundtrack.

Splash Woman in the end credits of Mega Man 9. 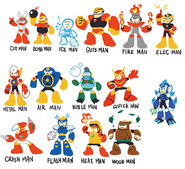 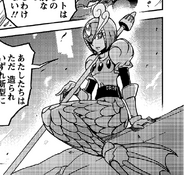 Splash Woman in Mega Man Megamix: For Whom.