Spring Man (スプリングマン, Supuringuman) is a Robot Master from Mega Man 7 who was created by Doctor Albert Wily. His body is predominantly composed of over two thousand springs, making him very light and able to perform very high jumps. However, this gives him a bit of trouble when trying to move around, especially up and down stairs.

Spring Man is an optimistic and carefree individual who is elusive, but likes to live life to the fullest. As a spring-based robot, he enjoys jumping as high as he can, but has an unfortunate tendency to accidentally hit his head on low ceilings.

Spring Man is one of the second four bosses, his stage being based in a theme park, where he attacks by throwing spike-tipped springs from his body with the Wild Coil, extendable punches from a distance, and catching opponents to ram them into the ceiling with a high jump. He is weak to the Slash Claw, as it can easily slice through his internal springs.

Spring Man will jump up to the center of the room, jump high, erratically spin and preform two spring punches. They are avoided by sliding when he is about to finish spinning. Then when he lands, he will use his Wild Coil (if there are not any already on-screen). The Wild Coil bounces across the room on the floor and off the walls. There are only five safe spots, which are in-between the coils; the coils bounce in the same spot every time. While the coils are bouncing, he will bounce by the screen, attempting to land on Mega Man and catch him to jump and smash him against the ceiling to kill him. This attack is very dangerous, as it takes eight units of damage from Mega Man. It is better than to keep constantly moving, while stopping on the safe spots to avoid the coils. After this, Spring Man jumps back into the position he started and begins the pattern with. Again, his weakness is the Slash Claw, and it can cut down his Wild Coils. If he is struck by it, he will go directly to the phase of performing the spring punches. It defeats him in seven slashes.

He is immune to the Thunder Bolt, and if it is used against him, it will cause him to become magnetized, and try to pull Mega Man to him for awhile. If he succeeds, he will use the ceiling smash. However, if he fails, the battle will return to normal, and nothing will happen. Skilled players can fire Noise Crush (if earned) just as Mega Man enters the room; since the sound wave will hit him before his HP bar starts filling up, it will instantly kill him.

Spring Man uses the Surprise Boxer, a tricky vehicle that uses springs to absorb shocks and attack opponents with punches. He entered the Battle & Chase to use the prize money for heavy parts and accessories in order to make his light body more stable. If the player wins the game with him, he buys the parts he wants, but over-exaggerates and finds himself barely able to move.

Amount of damage in units that Spring Man receives from each Special Weapon in Mega Man 7.

In the manga Mega Man Gigamix, Spring Man is one of the racers in the Battle & Chase competition in the story "Burning Wheel".

Spring Man is also featured in the Archie Comics, first appearing during the Worlds Collide crossover arc with the Archie Sonic the Hedgehog series. In it, he appears as part of a large army of Robot Masters who battle the heroes in the Skull Egg Zone.

Back side view of Spring Man. 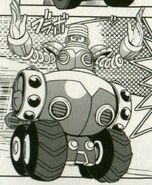 Spring Man in his vehicle in the manga Rockman Gigamix.

Spring Man in the manga Rockman 7. 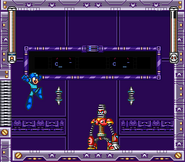 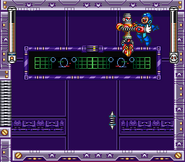 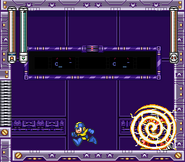 Magnetized.
Add a photo to this gallery

Retrieved from "https://megaman.fandom.com/wiki/Spring_Man?oldid=278285"
Community content is available under CC-BY-SA unless otherwise noted.