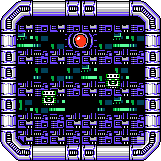 Square Machine (スクエアーマシン, Sukueā Mashin) is the boss from Cossack Stage 2 in Mega Man 4. It is an intruder prevention shutter made to protect important locations, such as the base's large mother computer. It slides around the room in three parts, similar to a slot game, doing so at various speeds. At its slowest speed, it will stop and combine together, and Mega Man must be inside when it closes to attack it. It is not possible to pass by its sturdy walls while closed. When it is fully formed, its weak spot, a large flashing red light on the top, will appear inside, and it will attack with plasma energy. Its weakness is Dust Crusher, although the Wire Adapter can be used as well to deal multiple hits. Mega Man will have to ride the maintenance platforms forgotten inside to reach the weak point and dodge the shots as he attacks.

Amount of damage in units that Square Machine receives from each Special Weapon in Mega Man 4.