MMKB
Register
Don't have an account?
Sign In
Advertisement
in: Shield weapons, Special Weapons in the classic series, Mega Man 5 items,
and 2 more

The Star Crash (スタークラッシュ, Sutā Kurasshu) is Star Man's Special Weapon in the Mega Man series. This weapon creates a star-shaped energy barrier that rotates at high speed around the user for protection, and it can be thrown at enemies in the direction the user is facing, being useful for both offense and defense.[1] It improves on the previous Leaf Shield and Skull Barrier by being able to protect the user from projectiles and be able to be thrown.

The Star Crash does not use Weapon Energy when activated, using 3 weapon energy units if the shield is hit while protecting the user or 2 units if it's thrown, and can still be used if less than the amount of energy required remains. With a full weapon energy gauge, Mega Man can shoot it 14 times or use it as a shield 10 times.

Star Crash can resist only one hit, but excluding shots fired by Dark Man 4, it can protect against every enemy bullet in the game. It is the weakness of Gravity Man and the Wily Press, and is somewhat effective against Dark Man 4 anyway.

Mega Man uses the Star Crash in the episode Curse of the Lion Men. In the cartoon, its chamber is shaped like a star, probably to generate the energy stars. Unlike its game of origin, it does not create a barrier but rather fires star-shaped blasts.

In the manga, the Star Crash (named Star Barrier in the Japanese version) creates a small gravitational field centered around the user. It not only acts as a defensive barrier, but can also be release towards opponents as an attack. The Star Crash is very resistant, being able to endure attacks from Bass and the Stardroids. It is only seen when used by Star Man, mainly to protect himself and his allies. 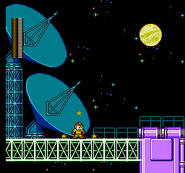 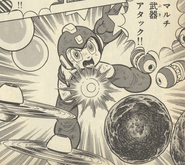 Mega Man using Star Crash and other weapons in the Rockman 5 manga.

Mega Man using Star Crash in Wish Upon a Star