"Can you see the star over there?"
—Star Man, Mega Man & Bass database

Star Man (スターマン, Sutāman) is a Robot Master created by Dr. Wily for both space exploration and combat, designed with high agility and the ability to fight at optimal efficiency in low-gravity environments. During the events of Mega Man 5, he occupied an abandoned satellite base orbiting Earth, being also allowed to concurrently serve as the supervisor of its remodeling. His Special Weapon, the Star Crash, creates a star-shaped energy barrier around him, allowing him not only to protect himself, but also to attack by throwing it at his enemies.

Star Man is an ardent romanticist who enjoys watching opera and musicals, but is also a sentimentalist. He has a tendency to be excessively emotional and make decisions based on feeling rather than reason, and does not get on well with pessimists. He often refers to himself by the nickname of the Splendid Noble Youth,[1] and dreams of someday travelling through space with a love of his own.

Star Man is one of the eight bosses. In battle, Star Man jumps around the room. At times, he will freeze in mid-air, then activate his Star Crash. After jumping around the room more, he will fire it at Mega Man. If the player uses the low gravity to their advantage, Mega Man can avoid it by jumping over it or slide past it if they are fast enough. He is vulnerable when he is not protected by his Star Crash barrier.

His weakness is Wave Man's Water Wave as it can pass through Star Man's barrier and negate it. It defeats him in seven hits. After defeating Star Man, Mega Man not only gains his Star Crash, but also the Super Arrow.

*The English translation of his data accidentally uses the word "exploitation" instead of "exploration".

Translation: Robot that manages the satellite base. Can only be damaged when his barrier is removed!

Mega Man Legacy Collection text: A robot who manages the satellite base. You can only damage him when his barrier is down!

Displays the amount of damage in units that Star Man will receive from each Special Weapon in Mega Man 5.

Star Man appears in episode 22, "Curse of the Lion Men", from the Mega Man animated series.

Star Man does not use the Star Crash as often, but can shoot directly at Mega Man with his cannon.  He retains his star-shaped arm cannon, which consequently fashions his plasma shots into something resembling a star.

In the manga, Star Man is a combat robot who acts as the administrator and chief sentry for Dr. Wily's space station. Being specifically developed for combat in environments with almost no gravity, he is equipped with special features that ensure physical stability in space. Through it is not nearly as powerful as Gravity Man's, Star Man has the ability to create a small gravitational field centered around himself, this ability being called the Star Crash. This ability not only acts as a defensive barrier for Star Man, but he is also able to release the gravitational field towards his opponent as an attack. His Star Crash is very resistant, being able to resist Bass' shots.

This incarnation of Star Man is a narcissist, acts very flamboyant and carries a rose in his mouth; the rose actually is used to communicate with Dr. Wily while operating in space, although it can only be used when Star Man holds it in his mouth. Star Man is openly fond of Roll, describing himself as a huge fan of her, to the annoyance of the other Robot Masters. He is depicted as the leader of the Mega Man 5 bosses.

Star Man first appears in the story "Holiday of Soldiers", where the eight Robot Masters from Mega Man 5 have part-time jobs at an amusement park to obtain money for Wily, refering themselves as "The Hourly Pay Squad: Part-Timers" and Star Man calling himself "Star Gold". Star Man operates a teacup ride when Mega Man and company arrive at the amusement park. Despite suspicions, the Robot Masters appear genuinly dedicated to their jobs and the safety of its patrons. The situation devolves into chaos however when Bass appears to take down Mega Man, decimating the park in the process. Star Man protects his allies with his barrier while the other Robot Masters fight back and manage to subdue Bass, much to Mega Man's surprise, as well as Wily's frustration to the fact that despite their victory, they are unable to achieve the same results towards world domination.

In Mega Man Gigamix, Star Man and the other Mega Man 5 Robot Masters reappear during the Stardroid invasion of Earth in "Moon of Darkness", assisting Mega Man against the invaders for the sake of their "customers". When confronting Mercury and Uranus, the Robot Masters realize they are hopelessly outmatched, and Charge Man rushes to help Mega Man escape while Star Man uses his Star Crash to shield their escape. Star Man's remains, along with those of the other Robot Masters, are later discovered having been savagely torn apart.

Star Man, along with the other destroyed Robot Masters, are later discovered alive once more, rebuilt by the combined efforts of Dr. Light and Dr. Wily, although Star Man comically loses his head again during a confrontation between Beat and Reggae. In the final stand against Terra and the remaining Stardroids, Star Man accompanies Mega Man, Ring Man and Shadow Man aboard Wily's Skull Satellite, his body hardwired into the craft to allow it to carry its passengers into space.

In the Worlds Collide crossover special with the Sonic the Hedgehog comic also put out by Archie Comics, Star Man appears as part of a large army of Robot Masters assembled by Dr. Wily and Dr. Eggman in the Skull Egg Zone.

Later, parts of Star Man can be seen in issue 54, showing that Wily began his development. 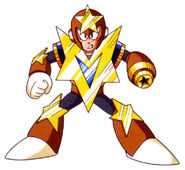 Front, side, and back view of Star Man.

Star Man in Mega Man: Upon a Star. 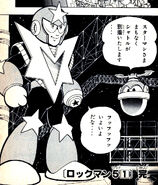 Star Man in the Rockman 5 manga.

Star Man (And several other robot masters) being constructed in the comics.

Retrieved from "https://megaman.fandom.com/wiki/Star_Man?oldid=351955"
Community content is available under CC-BY-SA unless otherwise noted.