This Massimo's original name is never revealed, nor is his original appearance ever shown, since he is only ever seen after inheriting the identity of Steel Massimo. He is a tall Reploid, being the tallest party member in Command Mission, and wears a dark green suit of armor with yellow and beige highlights. His shoulderpads have blue gems and large spikes, and a red pair of purely-cosmetic wings sits on his back. His helmet resembles that of a dragon or bird, possessing a beak-like visor and a mouthguard that covers most of his face. His eyes are bright blue and have red lines around the edges. He has a large M emblazoned across his pelvis and he normally wields a large beam axe or other two-handed weaponry.

Massimo is a friendly yet insecure Reploid who is seeking to better himself. He has a strong sense of justice and wants to do what's right, but feels he lacks the ability to do so. Disgusted by his own weakness, Massimo attempts to gain more power and courage by meeting with Steel Massimo, whom he looked up to a great deal. However, after being thrust into a position where he must take on the armor, name, and legacy of his idol alone, he is very anxious and feels inadequate at first. Once he is pushed far enough by the encouragement of the old Massimo and the sickening ways of Silver Horn, Massimo manages to accept his insecurities and use them as motivation to fight on, becoming a brave yet still self-aware hero.

Massimo described his old self as a coward and a weakling. Because of these insecurities, he sought out the original Steel Massimo in an attempt to grow stronger. The two spent an unknown amount of time together, until they encountered the Rebellion Army in Giga City. At some point the original Steel Massimo was captured and sent to Tianna Camp, but not before passing on his armor and weapon to the new Massimo.

When X and Spider first arrive at Tianna Camp, they meet Massimo, who's scared out of his wits and practically panicking. After Spider recognizes Massimo as a certain great hero due to the armor, he puts on a brave face and agrees to accompany them through the POW camp. Upon freeing the system operator, Nana, Massimo learns that the records show that the original Massimo was supposedly executed; while X and Spider believe this means the Rebellion mistakenly executed someone else, Massimo knows the truth.

A little later, after traveling deeper into the facility, Massimo splits from the group and meets with the original Massimo, chained and barely alive. He encourages the current Massimo that he can be strong too and tells him to keep the armor before succumbing to his injuries. After X finds him again, Massimo rejoins the group with a contemplative demeanor.

X, Spider, and Massimo confront Silver Horn, who stomps on Nana and mocks the original Massimo by referring to him as "feeble". Silver Horn describes in great detail his murder of the old Massimo, pushing the new Massimo far enough to flatten him with a single punch and curse the Maverick. After the trio defeats Silver Horn, Massimo confesses his past to X, but X and Spider boost Massimo's spirits and convince him to continue to help the Resistance.

Upon first entering the Gaudile Laboratory, Massimo briefly notices Marino's presence behind himself, but brushes it off. He is also present when the team encounters Dr. Psyche for the first time. When spoken to at Central Tower after Marino joins the party, he reveals that he has a crush on Marino and wants to get stronger so she'll notice him.

After serving alongside the Resistance for a while, Massimo's next significant role in the plot is at the Vanallia Desert. As X begins sinking into quicksand, Massimo attempts to save him from being submerged, and Zero tries to help him. However, the team is attacked by Ferham, causing them to all sink into the quicksand. Fortunately, they survive the fall and find themselves in an underground base. Later, after they defeat Botos for the first time, Massimo is surprised by how easy the fight felt.

Massimo is shown shielding Cinnamon from enemy fire when Colonel Redips sends Mechaniloids after the Resistance, and he goes with the party to clear their names at the Far East HQ. By the end of the game, Massimo ends up as a full-fledged warrior, mentally and physically, and feels confident in carrying on the namesake of Steel Massimo.

In battle, sometimes he can counterattack the enemy without using the Sub Weapon "Vengeful Counter", nor Force Metal "Massimo Plus". Counters do not trigger any effects gained via battle damage (Such as Belladonna's stat increase), nor do they trigger a Final Strike if it damages the enemy to that threshold. 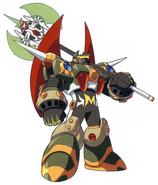 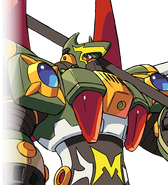 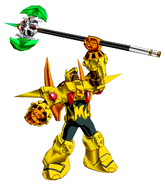 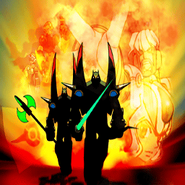 With the original Massimo in the Sky Room poster "Viva La Resistance!"

Massimo in Tower of Saviors.