SPIRIT SHARP-SHOOTER OF THE HAUNTED FOREST

Reploid who belongs to the 9th Special Battalion (Rangers). Using his tongue for quick attacks, along with his ability to blend into his surroundings, makes him a highly-skilled Hunter. On the other hand, he goes too far in his mantra of "by any means necessary," and is called a coward for his sometimes sly, sneaky tricks. Bested by Sigma, he joins the rebellion, using his skills learned as a Ranger to be the first line of defense for the forest base.

Emits high-level optical laser beams in 3 directions. Can also fire up and down at the same time.

Sting Chameleon bases himself in a jungle where he is confronted by X. X reprimands Sting Chameleon for joining Sigma, but Sting Chameleon states that Sigma will become the king of the new world and the two fight. In Free Play and Hard Mode, Sting Chameleon hints that Sigma may have taken hostages to force Sting Chameleon into complying with him, but he quickly drops the act and reveals he only wishes to leave his mark on the world. He is revived alongside the other Mavericks in Sigma's fortress, where he is a mindless shell of himself. X defeats him again, destroying him for good.

In Mega Man Maverick Hunter X, he can fire a faster, yellow-colored Chameleon Sting from his mouth after a short charge, which is more difficult to dodge from the opposite side of the room due to the beams traveling in a slightly narrower spread, leaving less room to jump between. He will always come to the ground to do this move, however, so that gives the player two separate warnings (grounding himself and charging). However, his most lethal attack is hanging from the ceiling by his tongue and causing spikes to rain on the player. There is no safe spot during this attack, so to avoid this attack the player should keep dashing in between the spikes to avoid them, and wait for Sting Chameleon to halt the attack before blasting him.

Sting Chameleon: Nyah hah ha! Poor wittle X... Everyone's betrayed you... X: Sting Chameleon! So Sigma's even managed to pull you into his scheme! Sting Chameleon: That's Master Sigma to you, X! He'll be king when the new world is born. Treat him with respect! X: I don't want to live in a world with him in charge!

X: Why have you all fallen in with Sigma? Sting Chameleon: Nyah hah ha! Well... Some of us can't help it. Maybe there are hostages involved and there's nothing we can do... X: Don't you know that what you're doing is considered Maverick? Well? Don't you? Sting Chameleon: Maverick, Schmaverick! I don't care so long as I make my mark!

Sting Chameleon: Whoo hoo! It's Vile... I used to have nothing but respect for you, you know. Vile: In that case, get out of my way and let me pass. Sting Chameleon: Nyah hah ha! I don't think so! We're going to have to fight! Vile: If you say so... I won't let you or Sigma stand in my way! 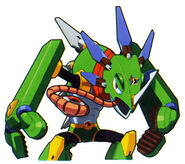 Retrieved from "https://megaman.fandom.com/wiki/Sting_Chameleon/Maverick_Hunter_X?oldid=340979"
Community content is available under CC-BY-SA unless otherwise noted.