Stone Man (ストーンマン, Sutōnman) is a strong Robot Master that was built by Doctor Albert W. Wily to look like and be as tough as a bunch of bricks. Stone Man is strong-willed and stubborn. He enjoys watching movies and drinking oil with Guts Man, who he is good friends with and bears a resemblance to due to their brutish builds. Coincidentally, both robots are strong and attack with rocks, and both are weak to an explosive weapon in the first game they appeared. He dislikes stingy people.

In Mega Man 5, Wily ordered him to occupy a high mountain to help Gyro Man take over a hanging garden. Despite his weight, he can jump quite high. However, if he jumps too high or is hit by a strong attack, the impact will make his body break apart. Either way, he can reconstruct himself back to his normal form. His weapon, the Power Stone, makes heavy stones circle around him, bashing anything in their path with immense force. In Mega Man 2: The Power Fighters the Power Stone makes a big, forward crawling stone hand. He can also create a wall of bricks to protect himself from incoming attacks and can throw stone pillars at his foes. His weakness is the Napalm Bomb, as it can shatter his external chassis before he can reassemble himself.

Stone Man attacks by using Power Stone. Although this rarely occurs, if Mega Man gets hit, he will take heavy damage from it; however, it is easy to avoid. He also tries to jump on Mega Man to crush him, sometimes jumping up high and breaking to pieces on impact with the sheer force, before quickly rebuilding himself. The high jump can be easily avoided by sliding to the side Mega Man has more space on, then shooting at him. Stone Man is weak to Napalm Bomb, but it can be difficult to hit him with it as it does not explode against him when he is disassembled and its trajectory can be a bit unpredictable—it is recommended to fire it as soon as he has finished reconstructing himself. To do this, one must be virtually on top of Stone Man in order to guarantee a hit (he does not deal contact damage when he is disassembled). However, seven hits from Napalm Bomb is all it takes to defeat Stone Man.

Stone Man is one of the second four bosses. He uses the same actions as in Mega Man 5, except the impact from his high jumps will now make Mega Man bounce about slightly.

"You have no choice but to avoid the Power Stone. Time your jump! He is weak against unexpected attacks. Sound for example..."
—Dr. Light

Stone Man is one of the six bosses from the "Rescue Roll!" course. He is weak to Noise Crush.

Stone Man is one of the initial four bosses. He is considerably more aggressive than in Mega Man 5, jumping around at a faster rate and having a lower vulnerable window. He only uses Power Stone on the Hard difficulty.

Translation: Was built ​​in order to secure the mountain as a scaffold to snatch the hanging gardens. Can't be damaged while collapsed.

Mega Man Legacy Collection text: Made to control a mountain from which the hanging gardens could be attacked. He can't be damaged when he's falling apart.

Translation (approximate): A robot made to ensure well scaffolding high mountains in order to capture a hanging garden. Has powerful attacks, specially the rock-wielding giant swing attack that if hit, can be fatal. Special weapon is Power Stone.

Stone Man appeared in the episode "The Big Shake" from the Mega Man animated series voiced by Ian James Corlett. He has an arm cannon that fires his Power Stone instead of forming them out of his own body like he does in the game. He has no lines (only grunts), although he is one of the more game-design accurate portrayals featured in the show.

In the manga, Stone Man's body is composed of numerous parts, each of which have basic "bit" functions. This unique composition allows him to disassemble and reassemble at will. Though his sheer size makes him an easy target to hit, he is able to evade attacks effectively by disassembling his parts. When disassembled, his core is centrally located among his parts and safe from critical damage. Stone Man's main weapon, the Power Stone, causes extremely dense stones to hit his opponent while swinging around his body, accelerated by each other's gravitational pull.

Stone Man first appeared in the story "Holiday of Soldiers", where the eight Robot Masters from Mega Man 5 have part-time jobs in an amusement park to obtain money for Dr. Wily. He operates the Ferris wheel. When Bass attacks the park, Stone Man and the others protect the guests and attempt to stop Bass.

Stone Man was also featured in the Mega Man comic series from Archie Comics. He made his first appearance during the Mega Man/Sonic the Hedgehog Worlds Collide crossover as part of large army of Robot Masters. He and Concrete Man battled Knuckles the Echidna, whom they quickly discovered to be as powerful as Guts Man. 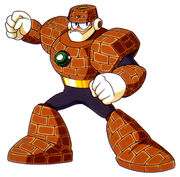 Stone Man in Mega Man: Upon a Star'

Stone Man in the Rockman 5 manga 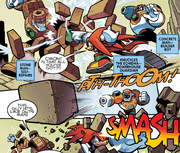 Stone Man (and several other Robot Masters) being constructed in the comics.
Add a photo to this gallery

Retrieved from "https://megaman.fandom.com/wiki/Stone_Man?oldid=272826"
Community content is available under CC-BY-SA unless otherwise noted.