MMKB
Register
Don't have an account?
Sign In
Advertisement
in: Articles with hAudio microformats, Featured articles, Articles in need of expansion,
and 15 more
English

Storm Eagle, known in Japan as Storm Eagleed (ストーム・イーグリード, Sutōmu Īgurīdo), is a character from the Mega Man X series, a Reploid based on an eagle. He is a former Maverick Hunter who serves Sigma.

Storm Eagle is a taciturn, careful strategist, enough to make him the leader of the Maverick Hunters' 7th Airborne Unit. He is truly noble and seeks out justice, only working in Sigma's uprising against his will. He harbors a strong sense of pride and refuses to surrender to X.

Storm Eagle's first reaction to Sigma's Maverick revolt was to fight against him, but realizing he was severely outmatched, he decided to join Sigma rather than be destroyed. Storm Eagle loyally, yet reluctantly agreed to follow Sigma and took control of the Death Rogumer, a new class of aerial battleship. X later attacked the airport and defeated Storm Eagle aboard the Death Rogumer.

Storm Eagle reappears in the second stage of Sigma's Hideout as an obstacle to X.

Being an air Maverick, he has advantage in aerial combat. Though his Storm Tornado and the wind from his wings only push X, but not damage him, it is used to try and make X fall from the Death Rogumer. The real threat comes from when he dives, as there is little time to react; although, if the player is fast enough, it may be possible to dodge and shoot him from behind. Oddly enough, he can spit eggs, which hatch and release 4 small blue birds to attack X. His weakness is the Chameleon Sting.

Storm Eagle first appeared as an event boss, and later as a co-op boss.

Flaming Storm Eagle is a version of Storm Eagle that appeared in the Hatsuyume event in the end of 2020, representing the eagle from Hatsuyume and being fought on a Takarabune themed Death Rogumer. His strategy is similar to the original version, but with more powerful attacks:

When defeated, Flaming Storm Eagle will fly away instead of exploding, wishing a Happy New Year on his first defeat.

In the manga Rockman X, Storm Eagle was a popular Hunter from the 17th Elite Unit and an object of admiration for his colleagues, but he also showed his strictness by rebuking them, saying that they should do some training if they have time for flattery. Soon after that, he meets Zero and a human-model Reploid and Maverick Hunter Teal, who becomes his girlfriend. Although he and Zero fight all the time at first, they come to accept each other. After Teal died during a mission in an airplane, despite Zero's attempts to rescue her, Eagle requested a transfer to another unit. Zero never saw him again until Sigma's rebellion, demonstrating his allegiance by attacking his old friend. Eventually, X fights against Storm Eagle in a large airship, severely damaging him to the point of losing his wings. Having recovered from their earlier encounter, Zero appears and stops the fight, revealing that Storm Eagle was just pretending to be a Maverick to test whether or not X was worthy of getting the head enhancement parts. Unfortunately, after praising X, Eagle passes away from his wounds, expressing regret things turned out as they did. To honor his memory, X and Zero encapsulate Eagle's remains in a rocket full of flowers, sending him off into space. Afterwards, Zero says to X that he envies him for being able to cry in a time like this, as he cannot.

In the Rockman X2 manga, a flashback shows that Sigma retrieved Storm Eagle's damaged weapon and presented it to Overdrive Ostrich, who once served under the deceased Hunter until losing his ability to fly. Enraged over his commander's death, Sigma convinces him to join his forces by saying it was Storm Eagle's dying wish, causing Ostritch to join the X-Hunters. Months later, a furious Overdrive Ostrich fights against X in the desert, but eventually realizes his mistake. As Overdrive Ostrich, suddenly regaining his lost ability to fly, sacrifices himself to stop a giant missile he had previously launched, he and X believe they see Storm Eagle flying alongside them. Storm Eagle would be seen as a recurring memory throughout the rest of the story, including Morph Moth's illusion and later Zero's imagination in X4.

The spelling of Storm Eagle's name in the early chapters of the manga was frequently rendered with only one long vowel mark (イグリード, "Egleed") instead of two like in his official spelling (イーグリード, "Eagleed"). According to Iwamoto in the tidbit of Rockman X2's reprint, he realized the misspelling about halfway through X2's serialization. However, when talks of the manga's reprint came up later, he was surprised and happy to learn that his early spelling had been adopted, and as a fan service, he announced on his website that he would use it for all of the reprinted volumes. However, as time went by, he began to think that it would be disrespectful to the staff involved in the production of the games and to the players who love the games to deliberately write the wrong name, when the initial spelling was a mistake in the first place. After much deliberation, he came to the conclusion that the name should be the same as it was in Comic BomBom, and he apologized for the half-hearted way things turned out.[3]

In the Carddass, Storm Eagle is revived by Dr. Doppler as "Storm Eagleed L" (Storm Eagle L). Storm Eagle is now red with yellow and white details, and has changes on his appearance such as a longer beak and shoulders, and a more detailed head and buster. He dies after fighting X.

In the Mega Mission history from the manga Rockman Remix, Storm Eagleed L attacks X with Burnin' Noumander L (Flame Mammoth L) and Sting Chameleao L (Sting Chameleon L). Initially, X doesn't want to fight them, but he's forced to by iX/Limited to kill them with one blast, leaving only debris.

Storm Eagle later appeared in the Worlds Unite crossover event between the Mega Man comic series and the Sonic the Hedgehog lines, which also featured Mega Man X. He was revived by Sigma through the power of the Genesis Portals and Unity Engines, and later appeared as part of an army that accompanied Sigma-2 as he emerged from the Lost Hex and set his sights on the Sky Patrol. After a brief battle with the Maverick Hunters, Freedom Fighters, and Robot Masters aboard, he and most of the other Mavericks departed for other worlds. Storm Eagle teamed up with Storm Owl and went to the world of NiGHTS into Dreams..., where he faces NiGHTS and is destroyed.

Storm Eagle acts as the commander of the 7th Airborne Unit and was tasked to deal with a group of Mavericks that had taken over an airport. While watching the situation aboard the Death Rogumer, he is approached by X, bearing a battle plan sent by Sigma. Arrogantly defiant, Storm Eagle refused to follow Sigma's plan and attacked X instead. As the pair were fighting, X would quickly become stronger thanks to him gaining new foot parts that boosted his movements. Sigma, having been informed of the situation, personally arrived at the Death Rogumer to reprimand Storm Eagle for his behavior.

Eagle attempted to retaliate against Sigma, but the commander's speed was too much for Storm Eagle, and Sigma quickly cut off Storm Eagle's wings and buster. With Storm Eagle injured, Sigma ordered X to use Storm Eagle's buster instead and take charge of the mission. Later, when Vile escapes his prison and starts a rebellion alongside, Spark Mandrill, Chill Penguin, Launch Octopus, and Sting Chameleon, a repaired Storm Eagle works alongside Armored Armadillo and Flame Mammoth when they believe that X had humiliated Boomer Kuwanger in a previous mission which caused him to depart.

Winter soon sets in as only Vile and Chill Penguin are the only rebels left, and the pair take advantage of the season by causing an avalanche and sending a threat to do the same to other towns to the Maverick Hunters. Against their advice, Sigma orders X to face the Mavericks by himself in an effort to help develop X's true potential. When X meets with Zero and learns that Sigma is the true mastermind behind Vile's rebellion, Storm Eagle, alongside Armored Armadillo, Boomerang Kuwanger, and Vile, all attack the pair to try and silence them.

While X defeats Kuwanger, the remaining three quickly corner X and Zero. Storm Eagle is killed when he attempts to summon birds to attack X, but X smashes through them with Storm Eagle's own Storm Tornado, and the attack blasts through Eagle; tearing him to shreds. 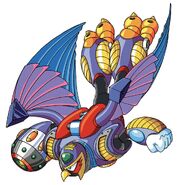 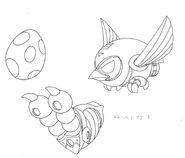 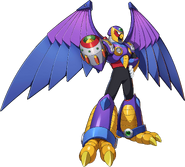 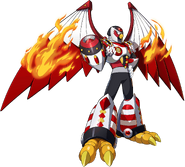 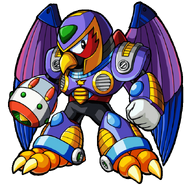 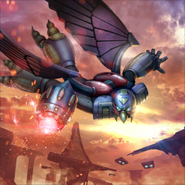 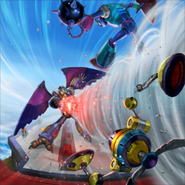 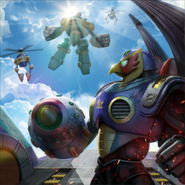 In the TEPPEN card Attack From Above. 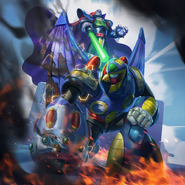 In the TEPPEN card Disloyal Follower. 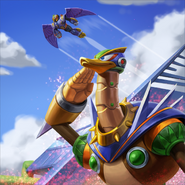