Strike Man (ストライクマン, Sutoraiku Man) is a Robot Master from Mega Man 10. He can attack by throwing a powerful fastball in a move called the Rebound Striker, as well as by spinning and bouncing himself around like a ball.

Strike Man was a stadium batting-practice robot before he malfunctioned due to Roboenza. He can throw just about any kind of pitch, but gets upset when he gives up too many hits. In one incident, Strike Man was almost sent back to the factory for maintenance when he hit a batter that he didn't like with a pitch that put him in the hospital.[1]

Strike Man starts his battle off by jumping and throwing a Rebound Striker at the player, which bounces six times before it disappears and dealing extra damage for each bounce it takes, from a minimum of two HP if it hits Mega Man head-on, and up to seven HP if it hits on the last rebound. Depending on the jump he makes is the direction at which he will throw the fastball; a short hop means he will throw the fastball at Mega Man, and a high jump means he will throw it diagonally. The fastball also homes in on Mega Man as it bounces from the ceiling, but can be avoided by stepping out of the way.

After throwing the fastball, Strike Man will turn into a ball himself, rolling and bouncing around twice, invincible while doing so. If he makes a low bounce, he will follow with a higher one. If he makes a high bounce, he will follow up with a low, long one. He alternates between these two bouncing patterns, first one then the other he didn't make. Both can be avoided by passing below him and running towards the side of the arena Mega Man has more space to maneuver. He will then repeat this strategy.

Strike Man is most vulnerable to attacks when he stays close to the ground, while he is not in ball form, and on Hard mode, when he is dizzy after his special attack. His weakness is the Triple Blade: it can destroy the Rebound Striker, hit him while in the air before throwing the fastball to the ground, and can also hit him with up to two blades at close range for double damage. It defeats him in seven blades. He also takes slightly more damage than usual from the Wheel Cutter and Mirror Buster.

Displays the amount of damage in units that Strike Man will receive from each Special Weapon in Mega Man 10.

*For Proto Buster, the first is normal hit; the second is charged up.

Strike Man appeared during the Worlds Collide crossover arc between the Sonic the Hedgehog, Sonic Universe, and Mega Man comic series by Archie Comics. In Sonic the Hedgehog #250, during the Robot Master battle, Sonic managed to dodge a thrown ball by Strike Man, and gave the robot a look of disbelief that it was the best he could utilize against him, with Strike Man looking down in shame in response.

Strike Man appeared in "MAD's Guide to Video Game Cheats", a sketch featured in the ninth episode of the first season of Cartoon Network's MAD, where the player distracts and defeats him by using a cheat code that causes the stage to rain kittens.

Concept artwork of Strike Man and his stage. 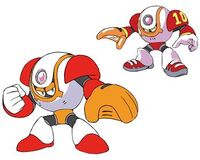 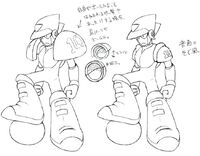 A more humanoid version of Strike Man that was scrapped. 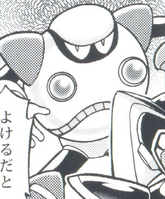