There are eight different styles: Guts, Custom, Shield, Team, Bug, Ground, Shadow, and Hub (in addition to the NormalStyle). Additionally, there are four different elements that any style can take: Aqua, Elec, Heat, and Wood. This allows for many different combinations for many battle situations.

In general, it is believed that MegaMan.EXE is the only Navi able to use Style Change, as Dr. Hikari had developed it especially for him, though it is suggested in the games that other Navis use "styles". It may simply suggest the fighting style of individual Navis, not the style change system itself.

It is needed for Dr. Hikari to complete his research so that MegaMan can become stronger, but he does not know where to get it. It turns out that the Chng.Bat is the national treasure of YumLand and had to be retrieved (more like stolen) from the treasure vault in Yumland area. It was guarded by YumLand NetNavis that have to be defeated. After it was retrieved, Yuichiro Hikari installs it into MegaMan, granting him the Style Change ability, giving him Style Changes depending on how he fights while the element assigned is seemingly random.

It is thought to either have been destroyed or removed after MegaMan's deletion in Mega Man Battle Network 3, as the ability is not present in later titles.

Elements are randomly applied to a style when it is obtained. New style changes obtained will always have a different element from the previous one. Except for Normal and Hub Styles, all styles can use an element and change MegaMan to that color. Each Style Change has different properties based on its element.

This style element is only applied to Normal and Hub Style, though hacked game data shows that other styles can come in non-elemental variations. It has no weakness and no elemental advantage.

These styles appear in both Mega Man Battle Network 2 and 3.

Guts Style is obtained for using the Buster more than other styles of fighting. It is attributed to having a large fist attachment. In Battle Network 3, the Guts Style enables the use of red NaviCust Program parts.

Custom Style is obtained by selecting as many non-Navi chips as possible in a turn, focusing more on Battle Chip and Program Advance strategies. It is recognized by the large upgraded backpack. Custom Style is allowed to use Blue Customizer Blocks.

A Style that is obtained by using recovery and defensive chips. This style is recognized by its shield on its right arm, and can use Blue Customizer blocks.

A style that is received by using Navi chips more than any other kind. It allows for more Mega/Navi chips to be placed in a folder at a time. Team is recognized by its larger helmet crest and stylized boots and gloves. It can use Green Customizer Blocks.

Certain Style Changes are exclusive to one game or version.

A style that is received by using 'invisibility' chips over all others. It is only available in Blue version of Mega Man Battle Network 3. It is recognized by its ninja-like design; the elongated helmet (resembling a streamlined biker's), high collar, and two wing-like scarf attachments. It specializes in special upgrades that prevent status effects on volatile panels (except swamp panels, for some reason). It can use Red Customizer blocks.

A special style only available in the White Version of Mega Man Battle Network 3. Obtainable by using panel changing chips, like Sanctuary or Grass Stage. Notable by large 'boots'. Green NCPs are usable. This style specializes in NaviCust parts that involve changing the initial terrain in battles.

A special style only available in Mega Man Battle Network 3. Bug Style can be attained by continuous virus busting with any bug from improperly placed Navi Customizer programs, and the bug must be present from the very first virus battle to the last. Players may change what bug is affecting MegaMan at any time, just as long as they have a bug for every single battle. This style is attributed to square "bug" lights. While in its own right, it is completely auxiliary, the Bug Style gives random effects during battle, usually negative, though it can do things such as start MegaMan with a 100 HP barrier.

The benefit of this style is the NCP called "BugStop". With BugStop in the customizer, programs can be placed in anywhere without fear of negative bugging. However, programs like Undershirt or Press, still need to be placed on the command line, otherwise they do nothing. BugStop will come in handy if players want to use the 'HubBatch' NCP. This style also is the only style to use the Dark License program, which allows for the use of certain Giga Chips which otherwise need a Dark Hole present.

A style that appeared in Mega Man Battle Network 2, Mega Man Battle Chip Challenge and Rockman EXE WS. Its appearance is of a lighter colored "normal" style (purple in Battle Chip Challenge). Players would need to get a S Rank for every boss battle except for Bass in order to get this style. It takes all the attributes of Guts, Custom, Shield, and Team Styles, maxing all stats; however, MegaMan's Max HP is halved. Effects of the style in Battle Network 2 are:

While it doesn't exist in the third game onwards, there is a Customizer Program "HubBatch" that simulates most of the effects, including the HP halving. This can be remedied with the BugStop program. In the Falzar version of Mega Man Battle Network 6, there exists a Giga Chip called "HubBatch" which also replicates the positive effects of the Hub Style when used. In Mega Man Battle Chip Challenge, Hub Style consists of more memory to put stronger chips in but less HP.

In other media, the Style Change system operates under different circumstances than the games. In the anime, each style has a single element assigned to it and some of the abilities differ from what is established in game canon. In the NT Warrior manga, styles are not differentiated by element at all, though there is a nod to the original system. 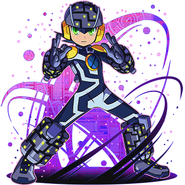 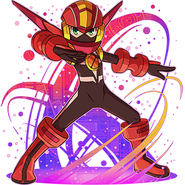 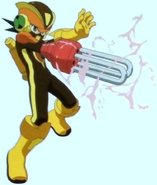 AquaCustom Style art from MegaMan NT Warrior.
Add a photo to this gallery

Retrieved from "https://megaman.fandom.com/wiki/Style_Change?oldid=324722"
Community content is available under CC-BY-SA unless otherwise noted.