A Sub Tank (サブタンク, Sabu Tanku), sometimes written as Sub-Tank, is a recovery item from the Mega Man X, Mega Man Zero, and Mega Man ZX series. They are usually found hidden throughout stages and will be added to the inventory once picked up. Unlike their counterparts from the classic Mega Man series, the Energy Tank, they are not available for immediate use, nor are they removed from the inventory when used. Once a Sub Tank has been found, picking up a health item when the character is at full health will instead fill up the Sub Tank. The amount the Sub Tank is filled is based on the type of health recovery item picked up.

Using a Sub Tank will restore health to the player until his or her health is back at full or the Sub Tank is empty. If the character's health is restored to full before the Sub Tank is empty, the Tank will retain the excess in the Tank, except for some games from the Mega Man X series. Most games limit the amount of Sub Tanks acquired to a maximum of four. However, some game modes, such as Expert in Mega Man ZX Advent, or attempting to keep an A ranking in some games of the Mega Man Zero series (with the exception of Mega Man Zero 4), limit the player to one or two Sub Tanks, or none.

Weapon Sub Tank, also known as Energy Sub Tank, is a special kind of Sub Tank (not to be confused with the Weapon Tank from the original series) introduced in Mega Man X4. They act very much the same as normal Sub Tanks, except they fill and restore weapon energy instead of life energy.

The EX Item (ＥＸアイテム, EX Item) is an item introduced in Mega Man X4 that is usually placed in the same category as Sub Tanks, though it is actually quite different from the others. Picking up the EX Item allows the player to start a stage with 4 extra lives instead of the usual 2.

All Sub Tanks throughout the X series are found scattered throughout the game. They are usually hidden quite well and many require the use of a Special Weapon or armor enhancement. Others require some creative tricks like using an enemy attack to break a wall. Mega Man X-X3 and Mega Man Xtreme has four Sub Tanks, Mega Man X4-X7 only has two Sub Tanks, but added one Weapon Sub Tank and one EX Item, and Mega Man Xtreme 2 has two Sub Tanks. Mega Man X8 only has two Life Sub Tanks and one Weapon Sub Tank, but has other items that could be used to restore health. Also, finding certain Rare Metals provides Sub Tanks with double capacity, due to the use of two characters per stage.

Obtaining a Sub Tank in Mega Man X: Command Mission is different. The simplest way to find one is by completing a storyline mission and defeating the boss. In addition, collecting four pieces of one Sub Tank hidden in the dungeons rewards the party with an extra Sub Tank. The player begins with the game with two pre-filled Sub Tanks and can increase the total number to ten.

In Mega Man X DiVE, Sub Tank is a DiVE Trigger that can be used only once per mission.

Similar to the early Mega Man X series, the Mega Man Zero series normally has access to four Sub Tanks. However, unlike the X series, most Sub Tanks are obtained by finding Cyber-elves, and then feeding them enough E-Crystals to allow them to fully transform them into Sub Tanks. Since using Cyber-elves negatively affects Zero's ranking in most of the series, perfectionists often choose to play through the Zero games with two or fewer Sub Tanks. Different modes offer extra help or limitations as well. For example, Easy Mode of Mega Man Zero 4 allows the player to start with 2 full Sub Tanks, whilst Hard Mode in the same game will limit the total to only three, as one of them requires a certain condition of the weather to be set. However, it is possible to get the 4th one if Zero picks up a weapon from one of the Variants, its flame shot will melt the ice, allowing Zero to claim the Sub Tank that is there.

There have been 4 Sub Tanks in each of the Mega Man ZX games so far. They act the same as Sub Tanks in both X and Zero series. Since Cyber-elves are no longer used, they are either found hidden throughout the levels or are rewarded as a result of a sidequest. In addition, there have usually been "antique" dealers who provide the precursor to Sub Tanks, Energy Tanks, which act exactly like their classic counterpart. However, in Expert Mode of both games, Sub Tanks are almost non-existent. They can only be obtained in a corresponding side quest. All other Sub Tanks found outside of side quests are replaced with absolute health filling items. 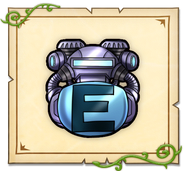