None, although Spark Chaser can damage him multiple times.

"I am Sunstar... The doomsday weapon... I must destroy all inferior life forms!"
―Sunstar, Mega Man V

Sunstar, known as Sungod (サンゴッド, Sangoddo) in Japan, is the final boss from the Game Boy game Mega Man V, a powerful robot that wants to dominate the entire universe. He is an ancient doomsday weapon from the same era as the Stardroids that was found by Dr. Wily in some mysterious ruins.

After his defeat inside the Wily Star, Wily activates Sunstar and commands him to destroy Mega Man as a final resort. However, Sunstar attacks Wily instead, critically damaging his Wily Capsule with a single shot which causes him to retreat. Afterwards, Sunstar turns his attention to Mega Man who is standing before him. He introduces himself as the "doomsday weapon," stating he "must destroy all inferior life forms." It's after these words that Sunstar engages in battle, forcing Mega Man to defend himself.

When Sunstar is defeated in the battle, Mega Man asks if he is all right, and if he wants to be taken for repairs in Dr. Light's Laboratory. Surprised by Mega Man's kindness to an enemy, Sunstar asks why he is helping him, as both are robots created only to fight. Mega Man says that he is wrong, and that he will only fight when it is needed to protect the world. Mega Man then tells him that robots and humans can live together in peace. Sunstar thinks about what Mega Man said, but says he will never know, as his fusion reactor was critically damaged and it could explode at any moment. He then tells Mega Man to leave. In the Japanese version, he also notes that peace was unimaginable for his civilization, but Mega Man may be able to achieve it. He then told Mega Man that his explosion will destroy the dangerous Wily Star, his final act being one that will help bring peace.[2] Shortly after Mega Man's escape in Rush Space, Sunstar's explosion decimates the entire Wily Star. Mega Man watches the scene over his shoulder as he makes his way back to Earth.

Owing to his being the final boss, Sunstar's Special Weapon, the Nova Weapon (unnamed in the Japanese version), is unobtainable by Mega Man during gameplay. However, Dr. Wily indicated prior to Sunstar turning against him that the Nova Weapon's capabilities were powerful enough to destroy Mega Man outright.

Sunstar has three phases and is a threatening enemy:

Sunstar has no primary weaknesses to any of the Special Weapons, but Mega Man can effectively use Spark Chaser, since it can hit Sunstar multiple times. Interestingly enough, like Uranus, Sunstar takes the same damage from a charged Mega Arm as an uncharged shot.

After defeating Sunstar, the last cutscenes will roll.

Amount of damage in units that Sunstar will receive from each Special Weapon in Mega Man V.

An aggregation of negative emotion, born from the negative emotions harvested from people’s hearts and refined by Dark Moon. It is not a robot like the Stardroids, much less a living organism as commonly understood. Being an aggregation of disparate thoughts, it does not possess an individual sense of self; composed of fear, despair, and other negative human emotions, it is a collection of all that is negative in the world, and moved only by the urge to destroy its surroundings. The reason negative emotions win out during collection is simply that they are much easier to harvest from most people.

In the story Toward a Bright Tomorrow, Sunstar emerges from Dark Moon when Dark Moon and Terra were defeated by Mega Man in space. It and Mega Man do battle, all the while questioning Mega Man if it's worth fighting for the Earth and its people. Mega Man refuses to give up and believes in the people and eventually destroys Sunstar. It is described as being the ultimate doomsday weapon, capable of destroying the entire universe.

In issue 32, Sunstar and the Stardroids are on a giant orbiting space station, and they receive a message from Ra Moon who before shutting down tells them to avenge it. Coincidentally, when Needle Man is taken control of by Ra Moon earlier, he says "destroy all you inferior lifeforms", which is similar to what Sunstar himself said in the game. He would also appear in Issue 54's Short Circuits strip alongside various other threats, and in Issue 55 when Dr. Light envisioned the events of Mega Man V.

Sunstar appeared briefly in exposition in a Robot Museum in the manga Rockman & Forte. 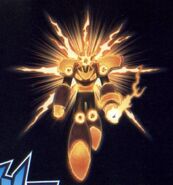 Sunstar in the Mega Man comic.

Sunstar in the Rockman & Forte manga.

Retrieved from "https://megaman.fandom.com/wiki/Sunstar?oldid=336501"
Community content is available under CC-BY-SA unless otherwise noted.