Super Arm (スーパーアーム, Sūpā Āmu) is Guts Man's special weapon. In the first Mega Man game, the Super Arm does not fire on its own. Instead, Mega Man must walk up to certain blocks, and if they can be picked up by the Super Arm, they will flash. Press the attack button to pick them up and press it again to throw them. If there is not enough room available to create an arc, or if/when they land on the ground, the blocks will scatter. In the two arcade games Mega Man: The Power Battle and Mega Man 2: The Power Fighters, boulders appear for the player. You can't climb while performing this.

Bosses That Can't Be Attacked By Super Arm

Proto Man uses the Super Arm against Mega Man in the first episode of the Mega Man animated series. After showing annoyance at the Robot Masters' lack of success in defeating Mega Man, Proto Man chose to go after Mega Man himself, copying Guts Man's power in order to help him to do so.

After chasing down Mega Man, he used the Super Arm's power to punch him through a hangar wall, before following him through to continue attacking. Eventually, Mega Man was able to get the upper hand against Proto Man, defeating him by knocking him into an aeroplane turbine, which fired him into a wall with immense force.

Its only visible effect was enlarging the size of Proto Man's right forearm, presumably to visually convey the extra strength granted by it. Interestingly, it was also the only special weapon Proto Man ever copied from a Robot Master on the show.

Bad Box Art Mega Man uses the Super Arm as his forward throw, lifting his opponent above his head and throwing them. 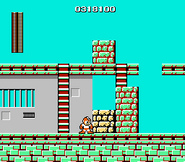 Mega Man approaching a lift-able block (indicated by the block flashing), while equipped with Super Arm. 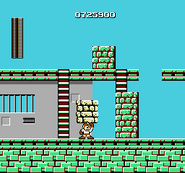 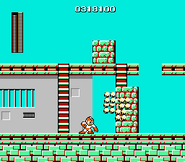 Mega Man throwing the block.
Add a photo to this gallery

Mega Man throwing a solid block while using Super Arm.
Add a photo to this gallery

Retrieved from "https://megaman.fandom.com/wiki/Super_Arm?oldid=174131"
Community content is available under CC-BY-SA unless otherwise noted.